Lucifer is All About the “Lady Parts” This Week 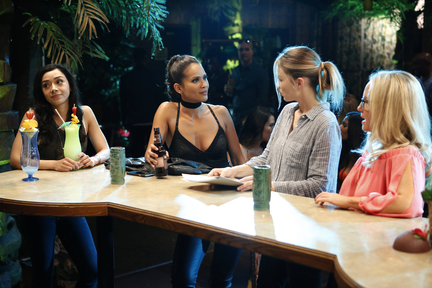 Detective Decker is having a bad week. Husband Dan wants a divorce. The idea of single-parenting her daughter is freaking her out. She has to move out of her mother’s house into a ridiculously expensive Los Angeles real estate market on a cop’s salary. Her consultant is obsessed with his new (first) smart phone. And, she’s realized (thanks to said consultant) she doesn’t really have any friends to hang out with. Also, there’s a couple of dead girls’ murders she needs to solve.

The first victim, Naomi, is found out in the woods by Griffiths Observatory. The trail of herÂ killer rolls through her Uber driver, past her womanizing chef boss with an angry wife, and up to the door of her roommateÂ and girlfriend, Naomi… where the second body, Naomi, is found. The only real clue at this point is the matching stamps both girls have on their wrists.

Meanwhile, Lucifer is convinced that distraction is the best way to avert his (and everyone’s) problems, When the detective starts pressuring him to share the problems on his mind,Â heÂ makes a wager with Maze that she can’t get the good detective to go out and have a good time. “Three drinks should do the trick,” he suggests. Maze scoffs that the wager’s too easy until Lucy clarifies that she’s not allowed to tie Chloe up and pour the drinks down her throat. It should be noted that Maze appears to enjoy winning wagers.

Amenadiel isn’t having a great time himself these days. His divinity is fading – wings molting, powers weakened – and Â then Dr. Martin misinterprets his issues to be erectile dysfunction. He agrees the situation is probably stress-related as having his mother around and knowing dear old Dad is waiting on Lucifer’s promise to deliver her back to Hell isn’t exactly a recipe for relaxation. Lucifer finds him drinking Cosmopolitans at LUX and decides his bro needs some (bourbon-powered) distraction.

Everyone gets a chance to let their hair down (so to speak) this episode. The girls’ night out at the tiki bar is epic in its awesome as we get to see Chloe get real with her situation; Dr. Martin expound on the benefits of female tribal bonding and trustÂ (Maze’s origin story is a seriously fabulous bit of sharing, btw); and Ella start to find her fit in the group (she HUGS Maze on first introduction, we discover that the movie Chinatown was her inspiration for moving to L.A., and, also, she stole cars — I’m kinda loving Aimee Garcia everywhere she shows up these days). Throw in tequila shots, some karaoke, and a bar-wrecking brawl and Girl Power is alive and well in L.A. tonight.

Some slightly inebriated sleuthing at girls’ night finds a lead to a pop-up sex club where the dead girls were spotted the last night they were seen alive. Chloe sends Dan in undercover with Lucifer who, in turn, brings Amenadiel. They question the bartender who lets them know there was a third blonde with the victims that night and that they were with a sleazy older man, Yuri (Robert Picardo, Star Trek: Voyager) who was buying their drinks.

As the pieces of the investigation fall into place, Chloe discovers the wager Lucifer and Maze had and feels betrayed that her big night out was a set-up. She’s able to vent a bit of that anger taking down Lily (Anne Leighton, Grimm) with a yoga mat. The former sorority sister and neighbour killed Daria and Naomi by accident trying to roofie them at the sex club so she could make some extra money. Between beating her down with the rolled up yoga mat, Chloe screams that there’s a special place in Hell for women who fake friendships as a way of manipulating other women. Lucifer confirms this as true.

Mother Morningstar, aka The Supreme Goddess, has only one scene in this episode as she’s serving the sentence Lucifer decreed last episode, living the oh-so human life of Charlotte which includes cooking, cleaning, childcare, and avoiding her husband’s questions through coitus. Maze visits and is reveling in her former assignment’s discomfort but looks a bit wounded when she is reminded that Lucifer and Amenadiel are family to Mumsy while Maze is utterly alone.

As it turns out, she took that barb to heart and convinced a tequila-saturated Chloe to be roomies. First though, she has to calm the waters between them since Chloe is still pissed about the wager. Not exactly the torture demon’s most natural skill but she gets the point across and Chloe seems to recognize the logic of the suggestion (once Maze reminds her of it).

The pacing of the episodes of this season have been the Devil’s own work. Just as this chapter starts to close, Amenadiel wanders in to Lucifer’s penthouse, hungover and still stressed out. He points out that Lucifer’s deal with God wasn’t for himself, it was for Detective Decker’s life, which remains in jeopardy if The Almighty feels that his fallen son has reneged. And as prophetic as biblical times, the next sceneÂ ends the episode with Chloe getting sideswiped in her car and spinning out of control.

Bull Shines Up His Halo in "Callisto"

The Following Conversation: A Brutal Truth Leads to Release in “Forgive”

Merlin “With All My Heart”