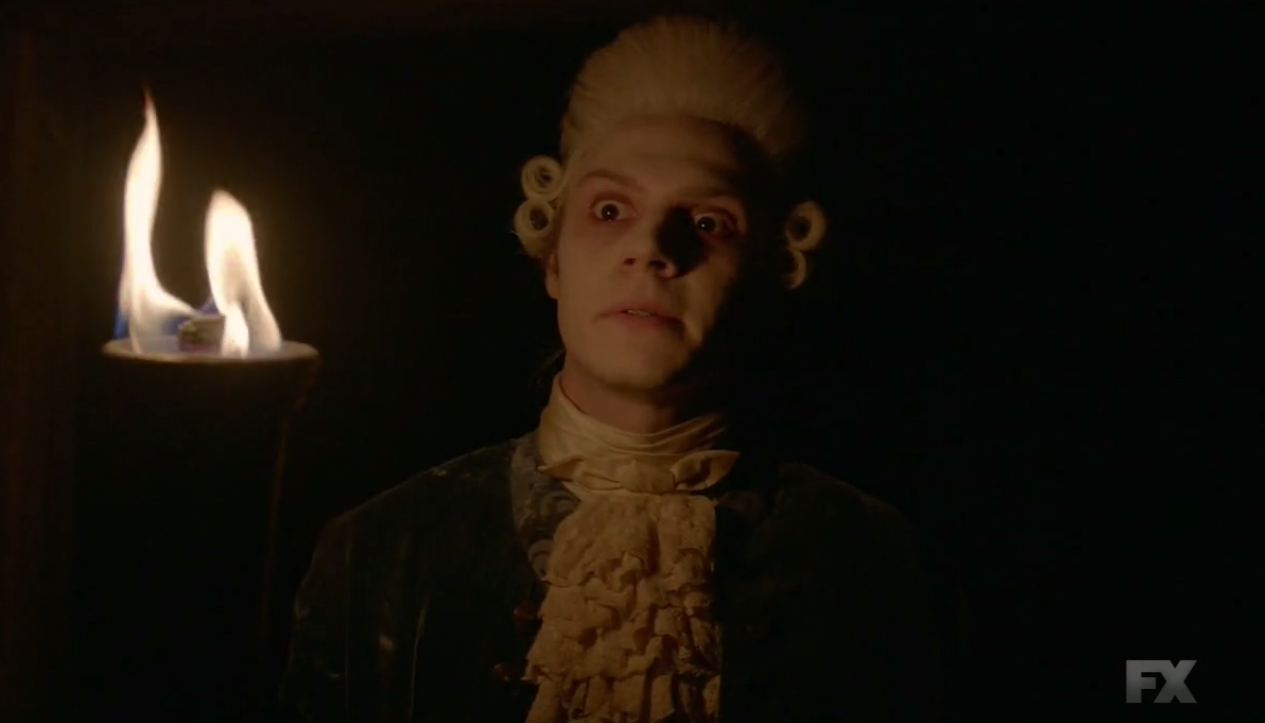 Where do we go from here?

There’s no way we can begin to talk about “Chapter 5” of American Horror Story: Roanoke without discussing its conclusion first. As the hour was wrapping up, so too was the tale of Shelby, Matt, and Lee’s ghostly experience. Each of their IRL counterparts expressed their relief toÂ finally being free of the house and property. How could their story end with an escape… halfway through the season?

It was unclear what we would see in the promo for the next episode, and the only glimpseÂ we got was of Cheyenne Jackson. He is seen in front of a camera telling his crew to follow him and to keep filming no matter what. That’s obviously not a lot to go on, but I’m just going to guess he was the producer behind My Roanoke Nightmare.Â What is he up to now? No clue. Is this the last we’ve seen of Shelby, Matt, and Lee? I’m going to guess no.

Without speculating too much on the next batch of episodes, let’s discuss how the first half of the season was wrapped up.

As the episode began, we were given a history lesson about the builder of the house, Edward Mott. Finally you show up, Evan Peters!Â If the name Mott sounds familiar, it’s because Edward is Dandy Mott’s ancestor. You all remember Dandy, our favorite little whiny murderer in AHS: Freak Show.

Edward built the home so he could remain secluded with his artwork and his lover, Guinness (who was also his servant). Bad things began to happen including the spiritsÂ destroying his beloved art. Edward locked his staff in the cellar thinking they were to blame. Unfortunately for everyone, The Butcher was to blame and Edward was killed by the spirits. His death meant Guinness was jailed for his lover’s death, and the poor members of his household staff starved to death because no one came looking for them.

Back in the present, Shelby, Matt, and Flora were trapped inside the house with the angry spirit mob outside. Before they could get away, they were corralled by various spirits, including Piggy Man and one crazy Grudge-looking ghost. They all managed to get to the basement where they ran into Edward, who was anxious to see them to safety. He explained their safety was more in service of his desire for less ghosts to be entrenching on his solitude.

While Edward may have led them away from the spirits, they now found themselves near the Polks’ home and were promptly captured. Mama Polks, played by Frances Conroy, led the clan of hillbillies. Oh, and did I forget to mention cannibals? Yes, the Polks were revealed to be eaters of human flesh because of course they are! The whole scene reeked of The Texas Chainsaw Massacre.

Poor Elias! Matt and Shelby were horrified to see that Elias had survived getting shot by arrows, but had since been in the “care” of the Polks. Missing a few of his limbs, he begged Matt for a mercy kill. The kill came courtesy ofÂ theÂ Polks after MamaÂ declared he no longer tasted good. Yikes!

Per their agreement with The Butcher, the Polks planned to deliver Shelby, Matt, and Flora back to the house. On route, Matt managed to kill one of the sons, but it wasn’t enough, they were captured again, and Shelby got a whack to the ankle with a sledgehammer. IRL Matt and Shelby revealed that they had given up at that point. There was no escaping death now.

Before they had to helplessly watch The Butcher kill Flora, Ambrose turned on his mother and pulled her into the fire with him. The Piggy Man planned to finish off Flora, but Lee showed up just in time to run him over with a car. Lee had finally been released after spending 48 hours getting questioned by police about Mason’s murder. The family drove off to safety at nearby hotel. The IRL versions reflected on their survival and the emotional scars that have stayed with them

So this is where we ended. The story is seemingly over, but there must be more. I have two predictions. First, we will get a continuation of the same story and the producers will do more investigating which leads everyone back to Roanoke. The second option is we get an entirely different story that somehow connects to Roanoke.

Check out the mysterious sneak peak of the next installment titled “Chapter 6.”