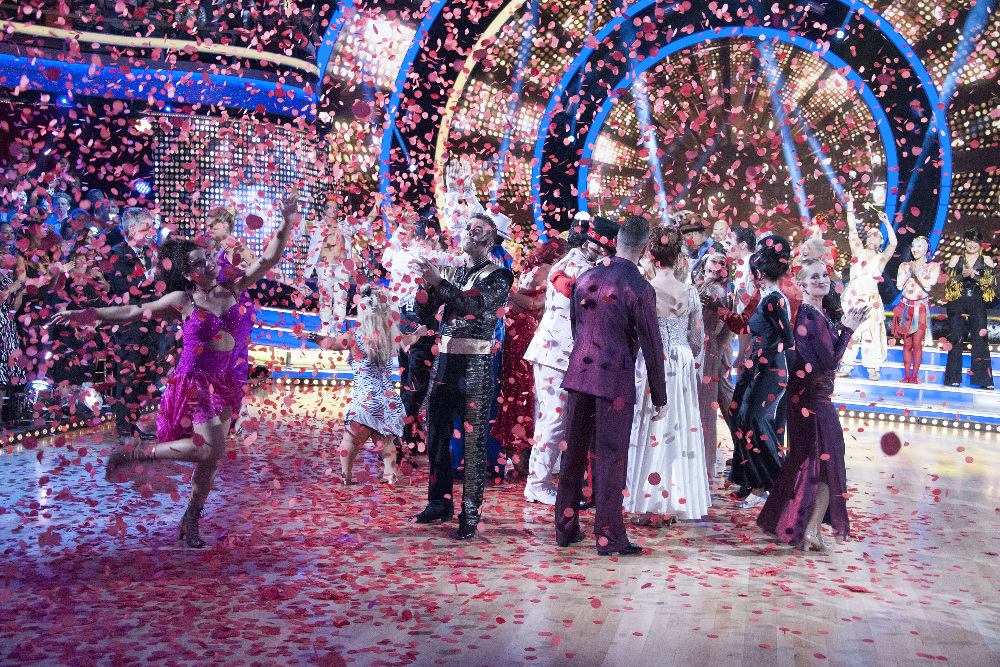 DANCING WITH THE STARS - "Episode 2304" - One of the biggest shows "Dancing with the Stars" has ever put on will unfold on the ballroom floor, as the 11 remaining celebrities perform big spectacle dances for Cirque du Soleil(r) night, on "Dancing with the Stars," live, MONDAY, OCTOBER 3 (8:00-10:01 p.m. EDT), on the ABC Television Network. (ABC/Eric McCandless)

This week was a first: Cirque du Soleil week! Thinking of how the performers were going to pull this off was really exciting and scary. On the downer side, no Len Goodman around as judge. But, no worries, he’ll be back.

Good news: Carrie Ann gave a pass on lifts since this was Cirque week. Better news: there was a marriage proposal! Not so great news: the dreaded double elimination. Everyone seemed to experience a difficult week in rehearsals, but I feel like every couple ultimately stepped up their game. Who went home? Let’s break it all down:

After a difficult week in rehearsal, Maureen was focused, which means she danced beautifully. Her lines were lovely and she worked it. I think her biggest issue is that she whines a little too much but, clearly, it comes from a place of insecurity. Hopefully, after doing well, she will feel more confident in her dancing.

After a busy week, Jana’s performance was simply nice. I agree with the judges. Gleb is doing great choreography. Her biggest issue is that sometimes she tends to come out of the dance, meaning she will be totally into her character and then, suddenly, we will see her break a bit. Julianne and Carrie Ann felt she needed to work on spotting during her turns. But the chemistry between Jana and Gleb is still there.

Derek was worried Marilu would be stuck in her head. Marilu has this condition called Highly Superior Autobiographical Memory. She can remember any day of her life and tell you all the details. Turns out this might actually be holding her back a little bit. I thought their Paso Doble was powerful, but she needs to feel more of the dance.

Apparently, after the last show, Amber felt Julianne had body shamed her, which wasnâ€™t the case. Amber apologized to Julianne and all was forgiven. Her Argentine Tango with Maks was super sexy. Her energy was up. She really embraced herself.

This was definitely Ryan and Cherylâ€™s best dance. His posture and arms were perfect. He now has to work on his emotions and staying in character.

Unfortunately, he screwed up some of the steps. It wasnâ€™t his best dance but I think the lighting worried him. It was a bit of a bummer.

I really think that Terra is fantastic. This was the first time she really struggled during practice. But she came out and danced like a pro.

This was the most spectacular dance of the season. Everyone thought, including myself, that the Olympic gymnastÂ was going to do flips and sheÂ didnâ€™t. As Carrie Ann said, Laurie killed it. And she was rewarded with perfect 10s.

Believe it or not, Vanilla Ice’s Viennese Waltz was really great. It definitely put him out of his comfort zone. He had a crazy workweek but made sure he knew this dance. He has to work on his hands but he is improving.

Racecar driver by day, Fred Astaire at night! It was a showstopper and it was magical. His holds with Sharna were perfect. Apparently, there was a little mistake that Bruno and I didnâ€™t notice. But Carrie Ann and Julianne did.

On the second night there was dancing and singing, but we know what was most important. Marilu and Derek and Calvin and Lindsay were the first couples to find out they were safe.

Before the eliminations started there was a bit of a shocker. Sasha Farber proposed to Emma Slater! I didnâ€™t know they were together.

It was a beautiful moment and the audience cried. As Tom said, â€œThis proves what a family Dancing with the Stars is.â€

Sorry, Babyface. I kind of had a feeling he was on the chopping block, but he took it all in stride. The fact of the matter is he did the show for his mom who passed away last year. This was a nice way to honor her.

Following the first elimination of the evening, Derek did an amazing routine. He danced. Played the drums. And he co-wrote the music. What can’t this man do?

More announcements. Who was safe? Laurie and Val (of course). It wasn’t a surprise to find out Terra and Sasha were safe, too. That meant James and Sharna were in jeopardy.

So it came down James & Sharna, Jana & Gleb and Vanilla Ice & Witney. The next safe couple: James and Sharna.

Vanilla Ice and Witney were eliminated whileÂ Jana and Gleb were safe.

Erin: â€œWe always have to have a party pooper and that name is Tom.â€
Tom: â€œIâ€™ve been trying to make a latte with this thing all day and it doesnâ€™t seem to work.â€
Tom: â€œItâ€™s my opinion but I donâ€™t have a paddle.â€
Tom: â€œLike outside of a car dealership.â€
Tom: â€œI bet a lot of people have table envy.â€
James: â€œI sit for a living.â€
Tom: â€œTo recap, we have a double elimination and one consummation.â€

Dancing with the Stars Season 23 airs at 8/7c central on ABC on Monday nights.

Krypton Gets Its “Zods and Monsters” Confused

The Blacklist “The Scimitar”