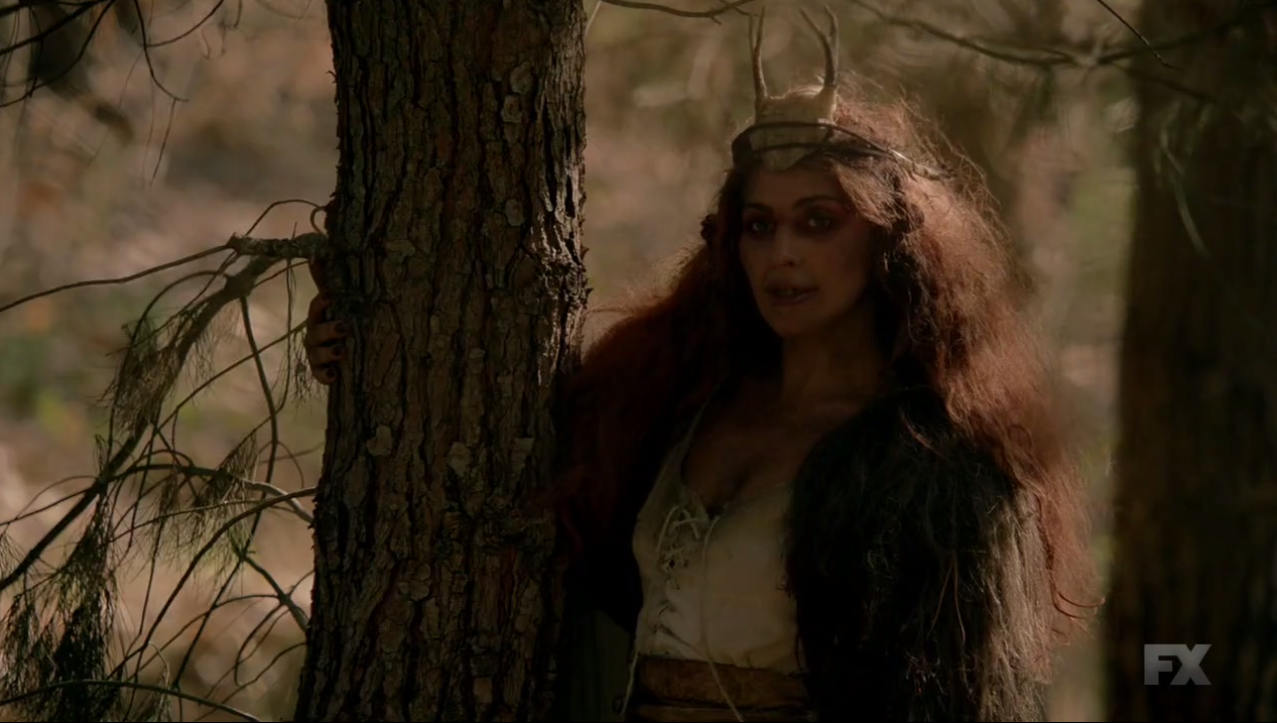 We are heading into the middle of American Horror Story: Roanoke, but the intrigue and scares are not letting up!

“Chapter 4” hadÂ Matt and Shelby running into some familiar faces, and Lady Gaga‘s mysteriousÂ woodland witch took us back in time for a history lesson.Â Despite another exposition heavy episode, the pacing and narrative remained tight and engaging.

Picking up right after Lee was arrested, Shelby grilled Matt on his romp with the woman in the woods. Matt almost had a meltdown, tearfully declaring he had no memory of his actions. Shelby felt he was telling the truth, and the discussion was quickly dropped. I don’t believe this type ofÂ discussion would end so quickly, but I’ll buy it since they’re not exactly in a normal situation.

Later on, Shelby made a classic horror movie mistake: she went into the bathroom where the shower curtain was closed all the way. Modern audiences are far too savvy. We know there will be something bad behind theÂ curtain. However, the shock of what’s hiding is not where the horror lies; it’s in our anticipation of Shelby discovering what we already know.

Once Shelby pulled back the curtain, out came Piggy Man ready to strike her. While running for their lives, Shelby and Matt were saved by Elias. After taking Piggy Man down with an axe,Â Elias shouted out Croatoan. We’ve heardÂ this wordÂ mentioned several times and with good reason. Croatoan invokes dark power and blood magic.

Matt and Shelby were stunned by Elias’ presence. He explained that he had maintained ownership of the house until he could no longer afford it, and that’s when Matt and Shelby bought it. I don’t know if I buy this story considering we saw him on camera in what looked like him meeting his demise. Regardless of his iffy story, Elias was useful in divulgingÂ more of the violent history of the house.

He alsoÂ mentioned the house originally belonged to Edward Philipe Mott. If you watched AHS: Freak Show, you’ll remember the murderous man-child Dandy Mott. Could we be on the verge of connecting these two seasons and learn the origin of the Mott family?

Elias further explained that theÂ Dying Grass Moon was fast approaching and this lunar cycle meant the spirits would be capable of physically harming and killing them. Matt and Shelby wouldn’tÂ leave withoutÂ Flora, so EliasÂ led them to Priscilla’s playground.

While following Elias’ lead, theyÂ came upon the woodland witch. Shelby chased after her, but quickly came across a strange group playing in the woods: Flora, Priscilla, Piggy Man, the creepy nurses, and other victims of the colonists.Â Before they could get Flora back, Elias was shot with arrows by the colonists. I was not expecting to see thisÂ character die so quickly!

Matt and Shelby fled back to the house where our favorite medium was waiting for them. Cricket came back knowing they would need his help. He explained The Butcher was royally pissed after they broke their promise to vacate and leave the property. Cricket further explainedÂ how he had an encounter with the woodland witch, the one with the real power.

Cricket offered up Matt in exchange for learning about the history of the colony. She showed him how The Butcher murdered everyone in the colony, including her son, when they questioned her demonic practices and worship. The Butcher also offered up her own life so that her blood and the blood of the colonists would be the keepers of the land for all eternity.

Of course before Cricket could be of further assistance, he needed to return to his hotel to retrieve various items. On route to the hotel in an Uber, Flora ran into the middle of the road stopping the car. I got a terrible feeling when Cricket got out of the car and ran after her.

After not hearing or seeing Cricket for hours, Matt made his way down to the cellar. Once there, he discovered the woodland witch again. The debt needed to be paid, so the witchÂ and Matt engaged in what he called the most intimate connection he had ever experienced. This intimate act allowed him to see who sheÂ was originally. She was once anÂ English girl who had descended from the druids. She become something mystical and all powerful. IRL Matt explained how the witch wanted him to join her, and in that moment he would have.

Luckily for him, he could hear Shelby’s screams from above and rushed to her side. The colonists were out for blood and they were going to start with Flora’s. Thanks to Priscilla’s quick thinking, she helped save Flora who ran to her family’s side. Once inside the house, they found no reprieve because the colonists had Cricket with them. They then proceeded to disembowel him in full view of the house. It was terrifying and disturbing, and poor Cricket never stood a chance!

This season has yet to disappoint me. The pacing hasn’t dragged and the narrative continues to stay on track. I also thought the imagery was quite striking in this episode. Everything from the framing of Flora engaged in a game with the spirits to the image of the woodland witch next to the tree.

I can’t wait to see where we go next. However, I am wary about the twist that is supposedly coming up soon. I don’t want some absurd twist to derail what is already a haunting tale.

Check out a sneak peek of the next installment titled “Chapter 5.”

Dancing with the Stars "Season 23 Week 4"