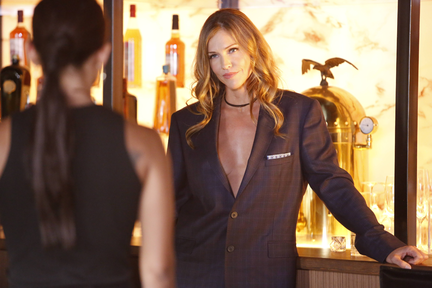 After a week off for the presidential debate, we return to our regularly scheduled devil and his recently (and repeatedly) reincarnated mother. Lucifer maintains its killer pace with its second episode. “Liar, Liar…” opens by showing us, in quick succession, the series of recently deceased bodies the GoddessÂ of All Creation inhabits in her bid for freedom from Hell before her appearance at Lucifer’s at the end of the premiere.

Apparently, each body only gets one inhabitation since she leaps from a heart attack victim who, unsure of how traffic works, gets hit by a truck to a gangland war casualty who immediately gets shot dead (again). Third time’s the charm and she leaps into the recently murdered Charlotte Richards (Tricia Helfer, Battlestar Galactica), conveniently both female and possessing “supreme hindquarters” (a phrase Lucifer will *never* un-hear). Also, Charlotte wakes up dead in a hotel room where whoever killed her has already left so, yeah, better.

Explaining all this to her darling son is met by aÂ less than enthusiastic response.Â Intent on proving her a liar, he retraces her steps to the hotel room where they find another body and then he leaves her guarded by Maze so he can hitch his cart to Detective Decker’s murder investigation.

When he arrives at the police station, Chloe is in the middle of an intense interrogation… of Trixie for the mutilation of her doll. Aside from the problematic professionalism of using a police interrogation room for lecturing her child, the detective’s parenting method strikes an odd chord with Lucifer who makes every attempt to give into Trixie’s desire for a new doll, feeling that Chloe’s hard line makes her a bad mother.

The seemingly trivial sub-plotline of “Trixie & the New Doll” is cunning in its purpose. In his current context, Lucifer cannot help but take Trixie’s side on this, feeling keenly his own mother’s failure to do right by him. Chloe points out his projection on the situation, articulating the idea that in doing what is right for their children, mothers don’t always make them happy. The episode is a study in perspectives.

From Lucifer’s perspective, Charlotte is his eternally untrustworthy mother housedÂ in a disturbingly attractive body. He spends most of the episode trying to prove that she killed the other body in the hotel room. However, as the case unfolds, he is forced to conclude that she is not the “ball of homicidal fury” he’d pigeon-holed her as. Further complicating things is the deal he struck with Pops (a.k.a. God), wherein he must return Mom to her cell in Hell. After a long talk where he recognizes a vulnerability he never credited his mother capable of, he puts on hold his retribution on Mom until he has time to think it through.

From Charlotte’s perspective, survival in this new existence means winning Lucifer’s trust and sanctuary. Whether that means making him cheesy noodles because that’s what mothers do according to television, or taking his directions quite literally (killing people and discarding clothing, for example, although not exactly at the same time), or admitting to her role in his being cast down to Hell, she has decided that he is the key.

Obstacles to her reconciliation with Lucy are: (1) Maze, with her thousands of years of torture in Hell wasted on a deity who never broke under the lash (and sundry other devices); (2)Â God; (3) also, for this episode at least, there’s someoneÂ looking to kill her body. Again. However, she has demonstrated that she’s a survivor and, at very least, a woman with a plan.

The perspective most noticeably absentÂ on this situation is Amenadiel’s and that baffles Lucifer and fascinates me. He is understandably distracted by his rapidly fading divinity. When he stands before a mirror and unfurls his once-magnificent wings only to show them molting and only feathered in patches, it’s truly heartbreaking. I have a suspicion that Charlotte may have a solution to his problem but I really want to see if he has some insight to her that Lucifer missed out on when he abdicated the duties of Hell.

It wouldn’t be Lucifer without something tantalizing to whet our appetites for next week and the wicked little smirk that Charlotte directs heaven-ward in the final shot ensures that there are devilish shenanigans in the works now that this wolf-in-sheep’s-clothes has returned to the flock.

Nashville â€œIâ€™m Not that Good at Goodbyeâ€

For Each “Harvest” There Must Be Sacrifice in Castle Rock