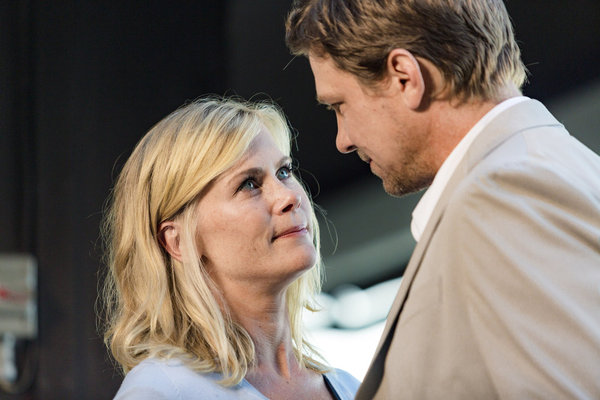 I do love when the Hallmark movies sneak up on me. Sunday night, Hallmark Movies & Mysteries has a premiere that I think was fast-tracked, or I’d just missed that it was coming. The Irresistible Blueberry Farm features Alison Sweeney and Marc Blucas in lovely, quiet performances in a film that’s part mystery and part romance.

Sweeney plays Ellen, a New York attorney still mourning the loss of her grandmother, Ruth, (Shirley Jones), even though that doesn’t stop them from having conversations, when she takes a trip to Beacon, Maine to hand-deliver a letter at her grandmother’s request.

Once there, she meets Roy (Blucas), a carpenter with an unexpected (not really if you watch enough of these, but go with it, it’s sweet) tie back to her grandmother. He also seems to be more her emotional match than her almost-fiance, Hayden (Kavan Smith). It’s a little bit fish-out-of-water tale and a little bit find-yourself-first kind of romance without a true foil or villain, which is nice.

It’s temperamentally close to last fall’s bittersweet Love on the Air, which is still on my DVR (and surprisingly, is not rerunning this weekend). I really enjoy Sweeney in these wistful roles, and Blucas is very good here, too, playing a genuinely kind man who’s as surprised as she is to find something awakened in him that he’d pretty much put a pin in.

The cast is filled out with Rebecca Staab (who’s only 15 years older than Sweeney) playing Ellen’s mom, Cynthia, plus familiar faces Samantha Ferris (who’s also in next weekend’s new Gourmet Detective) and Sarah-Jane Redmond, and a fun Murder She Baked nod that I won’t spoil. I’m also reasonably certain that one of the locations is Mulder’s farm and house from the recent season of The X-Files.

Kristoffer Tabori, Sweeney’s director on Murder She Baked and Love on the Air, directs a script from DOOL writer Melissa Salmons, who adapted The Irresistible Blueberry Bake Shop and Cafe by Mary Simses.

The Strain Preview: "The Battle of Central Park"