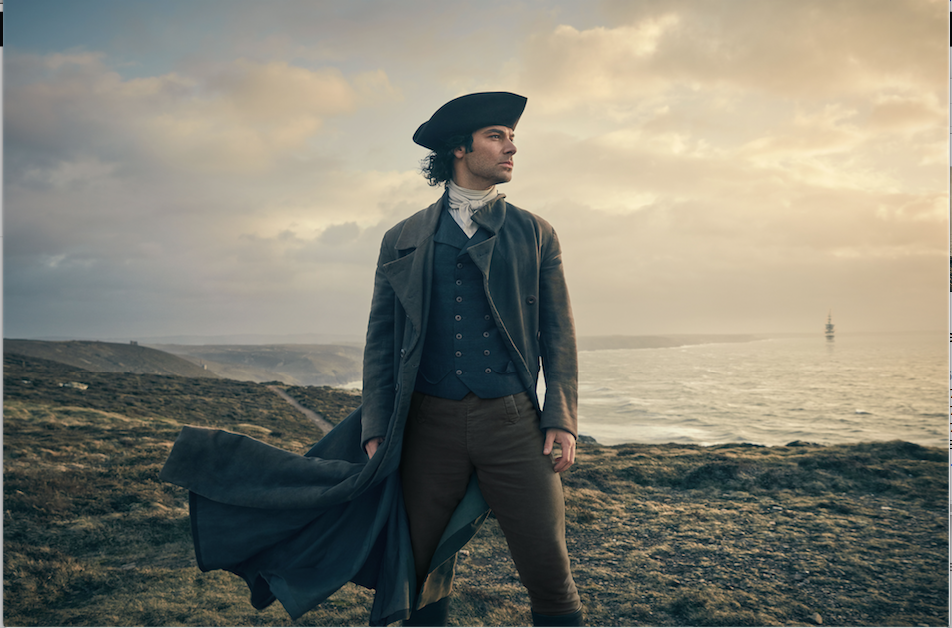 Masterpiece opens Season 2 of Poldark: â€œEpisode Oneâ€ with a brief recap. That being said, if you are a newcomer or just want to hear from the actors themselves about what to expect this time around, hereâ€™s a great clip. Iâ€™ve watched it several times. I never get tired of hearing from the main players.

â€¦and so it begins:

This time Ross is committed to trial for inciting a riot and murder.

Still recovering from the death of their daughter, a heartbroken Demelza (Eleanor Tomlinson) fears the worst. She seeks out the help of Ray Penvenen (John Nettles), ushering in a new character, the feisty Caroline Penvenen (Gabriella Wilde) and her dog, Horace.

Caroline, concerned over her pooch, calls on Dr. Enys (Luke Norris) and the two donâ€™t quite hit it off at first, but look for a budding romance between Dwight and Caroline later in the season.

Out for vengeance over the death of his cousin, and sheer hatred for Ross; George Warleggan (Jack Farthing) arranges a deceptive campaign to destroy any future Ross may have. Much to his surprise, Elizabeth (Heida Reed) and others approach George in an attempt to stop Ross from facing his worst fate â€“ death.

With the trial looming, Elizabeth reaches out to Ross and Demelza. Both ladies are eager to mend fences between the two families. Ross agrees and the two head off to Trenwith, only to find themselves confronted by George. The plan by Elizabeth to help her former love goes awry and her husband, Francis (Kyle Soller) isnâ€™t happy about it â€“ to say the least.

As the trial approaches, Ross and Demelza make love. A teary-eyed Demelza watches as her husband rides off to Bodmin to face his destiny.

Elizabeth and Francis reminiscence over past events, and wonder if their futures may have turned out differently if Ross hadnâ€™t gone off to war; meanwhile, both couples hope for the best.

.Rossâ€™s cousin, Verity (Ruby Bentall) returns this season, where she meets up with Demelza and her brother Francis in Bodmin.

A distraught Francis attempts to kill himself; however, the pistol fails and spares his life â€“ for now.

As the trial commences, witnesses for and against Ross take the stand. Eventually, our brooding hero speaks out in his own defense. The jury returns. Ross is found NOT GUILTY, much to the dismay of George, but to the delight of Demelza, Verity, Francis and Elizabeth.

Keep in mind, this is only the beginning. Fans of the beloved series can look forward to many twists and turns in the weeks ahead. You wonâ€™t want to miss an episode.

Hereâ€™s a reminder – on Sunday, October 9th, Poldark will be preempted for the Presidential Debate. PoldarkÂ “Season 2 Episode Three” will return the following week.

Decisions are Made for Better or Worse in Black Sails “XXXIII”