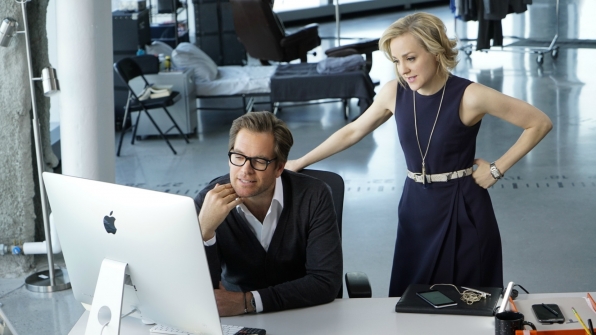 Primetime television has a new super human in its lineup and he doesn’t need tights, a cape, or a secret identity. Michael WeatherlyÂ (NCIS, Dark Angel) stars as Jason Bull, a psychologist specializingÂ in “trial science,” utilizing psychology, neurolinguistics, and demographics to select and predict a trial jury’s result. The character, inspired by the early career ofÂ Dr. Phil, runs TAC, a crack team of hackers, investigators, and stylists who give their clients insight on the juries they are facing and how to play them to get the desirable outcome based on behavioral patterns both in real life and online.

Bull‘sÂ pilot episode centers on a murder case where the prime suspect, Brandon (Luke Slattery, The Family) is the pampered teenage son of a rich businessman. Pete Peters (Frederick Weller, In Plain Sight). Unfortunate name aside, Peters is polling unfavorably with the potential jurors and his lawyer, Clyde (Peter Francis James, Oz), is even less appealing which all spells a long time in prison for disaffected young Brandon.

The TAC team scenes are a lot of fun – full of banter, humor, and the good-natured ribbing that goes on among people who understand each other (although they may not have known each other all that long as hacker Cable (Annabelle Attanasio, The Knick) seems surprised to find out Bull and Benny (Freddy Rodriguez, The Night Shift, Six Feet Under) were once brothers-in-law). It is obvious that Bull values his team: brilliantÂ Marissa (Geneva Carr, Law and Order: SVU), formerly of Homeland Security, keeps the office running with precision; former NYPD investigator Danny (Jaime Lee Kirschner, The Mob Doctor) takes resourceful to a whole new level; and Chunk (Chris Jackson, Oz, Hamilton) lends a clear-sighted and fresh perspective while dressing & styling clients for optimum effect. TAC’s power is in the collective.

Using a mirror jury, extensive background, and some useful connections, the TAC team is able to piece together the victim’s backstory before her murder and carry out their predictive process. As the trial progresses, Bull’s expertise is shown by direct insights provided by the jurors, stating their thoughts directing to him/the camera. He zeroes in on the linchpin juror, Bess (Samantha Jones, Law & Order: SVU) and figures out what will win her over.

The episode puts a nice, neat point in the win column for TAC, complete with revelations, surprise testimony, and confrontations. Brandon is acquitted and the episode wraps with the real killer being brought in. No one really emerges unscathed but a pilot episode with such a rapid pace really doesn’t have time to unpack all the damage that the real Dr. Phil could’ve (and probably has) written books about.

Bull spends a lot of time watching people – it’s his job after all – but after the trial, Juror Bess calls him out on that and on his compulsion to understand everybody and that lends some intriguing insight into our central character. After all, who really watches the watcher? Hopefully, many many audience members as this new show has a load of potential which I look forward to seeing fulfilled.

Van Helsing Preview: "Help Me" and "Seen You"

Lucifer’s Exes Get a Layover in “Stewardess Interruptus”

Ella and Lucifer Hunt For Candy in “Vegas with Some Radish”

Tuned In: Person of Interest uses Johnny Cash version of “Hurt” in “The Devil’s Share”