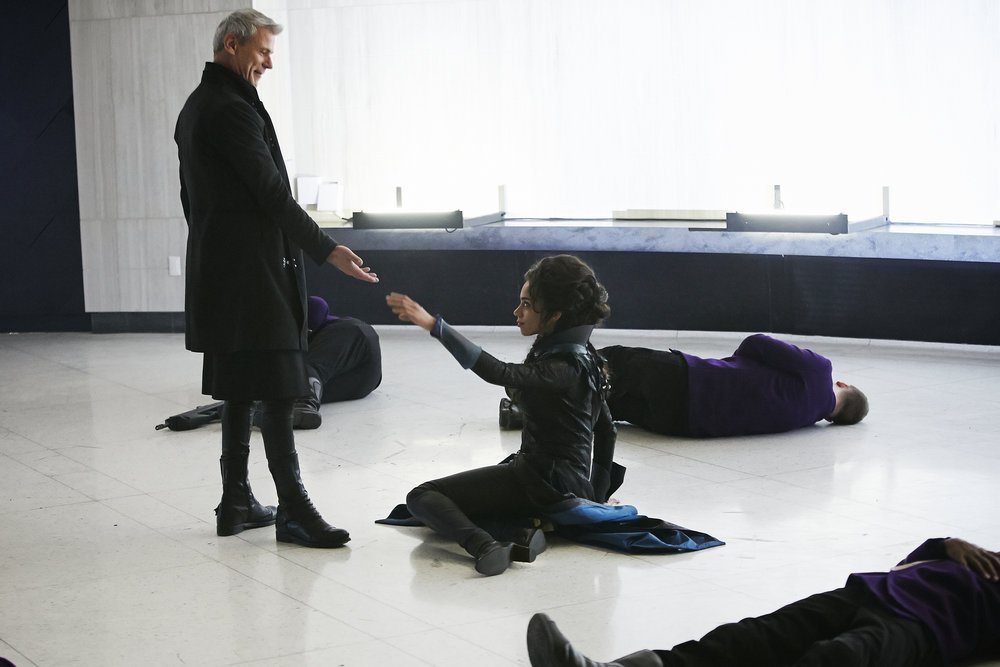 First up–this morning, Syfy and Space renewed Killjoys for a ten-episode third season while its Friday sibling, Dark Matter was also picked up (episodes TBD). This is excellent news in general and before we leap into the Killjoys Season 2 finale Friday night.

And it is a very good finale. This coming from the white hot ragey thing you witnessed last season. This year, I end the season with a peaceful calm. That’s not to say there isn’t bedlam at every turn, and heartache, and tears, and laughter, and massive ass kicking. You know, the usual.

It’s moot now, but when I watched the episode Monday night, I thought, “If we never see these characters again, I am OK with where we leave them.” That is a HUGE accomplishment for any series finale, and it’s very hard to find with any regularity in season finales, which was my primary complaint last year–if I’m a fan, I am coming back, you do not have to bait me with a cliffhanger.

There is no baiting this year. There are history lessons, resolutions, and new beginnings, promises, and declarations, but nobody is in a pod on a far flung base about to be experimented on. Yay, team!

The basics you should know: Johnny is reeling from Pawter’s death but he puts that in a drawer to help Dutch figure out whether Khlyen and Fancy’s intel can be trusted. D’avin teams up with Fancy and hilarity ensues (for us and D’avin, anyway). We don’t see Jelco again, but Delle Sayah is still running amok in Old Town.

It’s superbly written (by Michelle Lovretta and Jeremy Boxen), directed (by Peter Stebbings), and acted (by everybody), and the whole thing looks amazing–costumes, hair, makeup, sets–the whole shebang is A game. Lost Girl‘s Rick Howland pops in for a fun guest spot, too.

And that’s all you’re getting. Watch it LIVE. Come live Tweet! One word of warning: the finale is screening at Fan Expo in Toronto tonight, so might be best to filter your social media feeds accordingly if you want to watch it cold (I highly recommend you do).

Killjoys airs one more Friday at 9/8c on Syfy, and will only repeat on TV once, at 11/10c. You can catch on syfy.com beginning Saturday. Here’s a sneak peek of the season finale. In case you missed it, my exclusive interview with Lucy herself, Tamsen McDonough, is here.