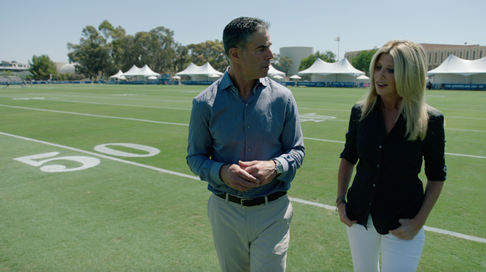 Before 1975 the term “female sports reporter” may have been a bit of an oxymoron to some people. The first women permitted to enter a men’s locker room happened back in 1975 when New York Times reporter Robin Herman got the go-head to interview players after the NHL All-Star game in Montreal. The problem? She and another female reporter, Marcel St. Cyr, became the story. In 1978 Sports Illustrated had to go to court to get their female correspondent, Melissa Ludtke, access to the baseball clubhouse for the World Series. And, finally, in 2001 Lesley Visser became the first woman to do color commentary for the NFL.

Have things gotten better for women in this profession over the years? While it’s true that we no longer heard about players flashing them and the guys from the leagues’ back offices harassing them, female sports reporters still have to put up with an incredible amount of sexism and unprofessionalism in the course of doing their jobs. Do you remember the #MoreThanMean video where they had male sports fans read mean Tweets to Julie Dicaro and Sarah Spain? “Mean” is putting it mildly. Women are routinely attacked, taunted and sometimes vilified for doing their jobs.

In this week’s Real Sports with Bryant Gumbel, correspondent Jon Frankel investigates what it’s like for female sports reporters currently in the business. While many have prominent roles covering the world’s biggest leagues and events and appear regularly on national and local TV, this brings unprecedented challenges. He hears first-hand how many female reporters wage a daily battle against being pushed to exploit their femininity, while at the same time having their credibility questioned by sports fans, even as they struggle for equal acceptance in this still male-dominated industry.

Fox Sports reporter Charissa Thompson talks about the backlash she received from the media when she changed her appearance, thinking it would make her more credible.

Here are a few excerpts from this piece:

And itâ€™s not just the clothes some reporters are wearing that are eye-catching… Some can act in ways that turns heads tooâ€¦ like Charissa Thompson, who covers the NFL for Fox.

Charissa Thompson: â€œI worked in the studio the last year and there was plenty of times that I wore dresses that I would get comments that it is Sunday, it is– you’re talking about football and you should not be wearing that dress.â€

Jon: â€œDo you think you’ve ever used your sexuality to an advantage?â€

Charissa: â€œI fully admit that I flirt. Have you seen my Rob Gronkowski interview? I’m looking across from the male version of me. He’s flirty. I’m flirty. I don’t wanna sleep with Rob Gronkowski, but I want a good interview.â€

Trenni: â€œItâ€™s calling me every name in the book. That I don’t belong on the sidelines. That I’m terrible at what I do. I’m a terrible person. And if I’m not gone by the time the All Star game rolls around, he’s gonna do everything he can to make sure I’m gone.â€

Jon: â€œThis wasn’t be gone, get off television. This wasâ€¦â€

Trenni: â€œ–be gone. We had to get security at a high level involved.â€

Jon: â€œWhat does that feel like? All of a suddenâ€¦â€

Trenni: â€œFeels like you’re caged in. I mean it– you feel like, â€˜Is that the person that hates me? Is this person gonna follow me to my car?â€™ All because I was a pre-game, in-game and post-game reporter for a baseball team.â€

Trenni has reported on all four major sports leagues, and â€“ just last week â€“ the Olympics in Rio. And now likes to think of herself as a seasoned reporter who knows her stuff. But she also knows plenty of other people still like to think of her as something else.

Jon: â€œIf one Googles you, you come up on The Definitive 25 Sexiest Sportscasters, 25 Hottest Sideline Reporters, TV Anchor Babes.â€

Trenni: â€œYeah, I mean I’m aware of those lists. It’s a fine line. Right? Because you have people telling you, â€˜Well, you gotta be hot. The hottest ones get all the attention.â€™â€

This episode also features a story on the McFadden sisters, who were both born with spina bifida. Tatyana has become one of the greatest wheelchair racers ever, competing in three summer Paralympic Games and winning 11 medals, while Hannah has been drawn to the sport by her competitive big sister. Soledad O’Brien examines their childhood, Tatyana adopted from a Russian orphanage at age 6 and Hannah from an Albanian orphanage at age 3, as well as their quest to compete in their second Paralympic Games together next month in Rio.

Bryant GumbelÂ revisits the story of Chancellor Lee Adams after initially meeting him back in 2012. Cherica Adams was gunned down on a desolate Charlotte, NC road 16 years ago. Eight months pregnant at the time, she eventually died from her wounds, but her son, Chancellor, miraculously survived, though he was left with cerebral palsy as a result of being deprived of oxygen in utero as his mother lay dying. Shortly after the incident, investigators concluded that Adamsâ€™ boyfriend â€“ Chancellorâ€™s father â€“ was the mastermind behind the shooting. That man, former Carolina Panthers wideout Rae Carruth, is currently nearing the end of his 18-to-24-year sentence at a North Carolina correctional facility. Bryant returns to Charlotte to discover the steps the family is taking toward forgiveness.

This episode of Real Sports with Bryant Gumbel premieres Tuesday, August 23rd at 11/10c on HBO.

The Night Of "Ordinary Death"