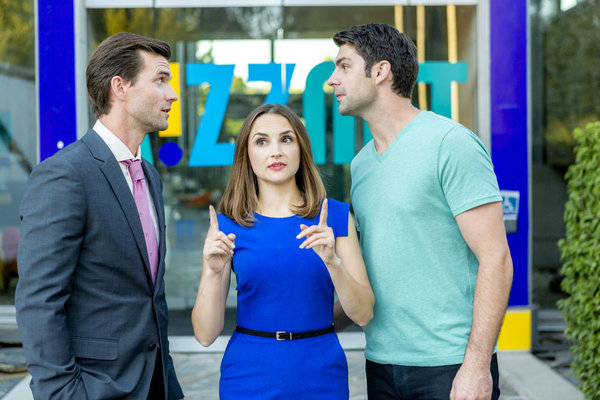 Lucas Bryant is a favorite around here, and we love that he’s been adopted into the Hallmark family. Saturday night, his second Hallmark Channel film in three months, Summer Love, hit our TVs.

Rachael Leigh Cook headlines as Maya, a widowed single mom dipping a toe back into a professional career with an internship at a tech company, where she find herself woefully behind the curve with all the young upstarts, at the beginning.

She learns to fit in and gets a silver lining with the romantic interest of two of the execs–Colin, played by Bryant (choose him!) and Will, played by Rookie Blue‘s Travis Milne (who’s adorable, too, but we’re partial).

Filmed in Vancouver earlier this summer, the film looked like a goof-fest behind the scenes, if Milne’s Instagram feed is any indication. I’ve been saying for a while now that I wish Hallmark would start running outtakes during the end credits of their movies, but nobody’s heard me yet.

The film is a funny, sweet, and at-times, awkward tale of a woman trying to navigate her professional and personal life as she starts over at 35.  I’m glad to see Cook and Milne get a shot at joining the Hallmark team, and of course we love that they’re keeping Bryant busy. He’ll also be on Canadian TV this fall in CBC’s Shoot the Messenger. No word yet on a U.S. outlet.

The Night Of Preview: "Ordinary Death"