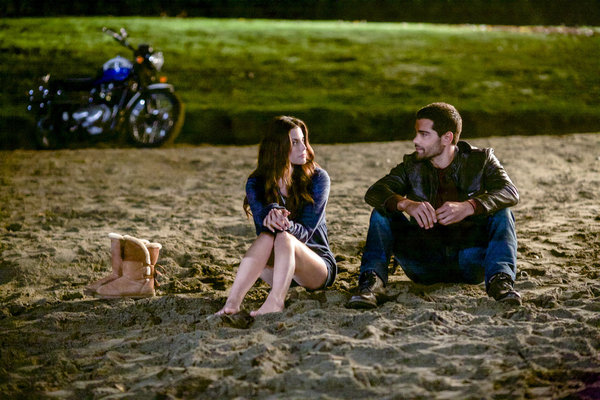 The one that got away is a common theme in Hallmark Channel’s movies, but it’s usually resolved in two hours. It’s an interesting proposition to build a series around the notion that the one that got away didn’t get very far, but the network’s new weekly drama, Chesapeake Shores, based on the series of books by Sherryl Woods and premiering Sunday night, sets out to do that.

It’s the story of Abby O’Brien (Meghan Ory), a single mom who’s spent a considerable time building her career at the expense of quality time with her daughters, until a trip to her hometown holds up a fairly unflattering mirror, and throws in a crisis or two, to make her rethink some of her life choices.

One of those is Trace (Jesse Metcalfe), the high school love she left behind, who’s also now returned home to reconcile some issues he encountered on his own path into adulthood. Another is her somewhat fractured family. She seems to have the most stable relationship with her grandmother, Nell (Diane Ladd) and father, Mick (Treat Williams), but it’s apparent from the behavior of her sisters (Laci J. Mailey and Emilie Ullerup) and the absence of her two brothers that their adolescence left some scars.

Mom Megan (Barbara Niven, who appears at the end of the episode, FWIW, but will be a season regular), left home long ago and while Mick was an excellent financial provider, emotionally, he fell short as a single parent.

The two-hour pilot lays the groundwork for a decision Abby will have to make (which isn’t a huge spoiler, given the title) while weighing what’s in the best interest of her daughters and herself. And Mick gets a talking to from Nell that sets things in motion on the homefront.

Fans of Cedar Cove will appreciate the ensemble nature of the show, and the familial overtones. We’re big fans of Ory around here, so we’re very happy to see her headline a TV series. Metcalfe has done a couple of Hallmark projects and is a good match with Ory. They’re believable as a couple whose worlds once revolved completely around each other, and who come together what I’d guess is close to 15 years later initially with hurt feelings and then with genuine affection and friendship.

There’s a generation that mostly knows and will always love Williams for his role as Dr. Andy Brown on Everwood, so he’s a no-brainer here as a dad trying to make up for past mistakes.

Chesapeake Shores premieres Sunday at 9/8c on Hallmark Channel and then will air Sundays at 9/8c and repeat the following Friday at 8/7c. Here are a couple of sneak peeks.

The Night Of "Samson and Delilah"