Dark Matter Preview: “She’s One of Them Now” 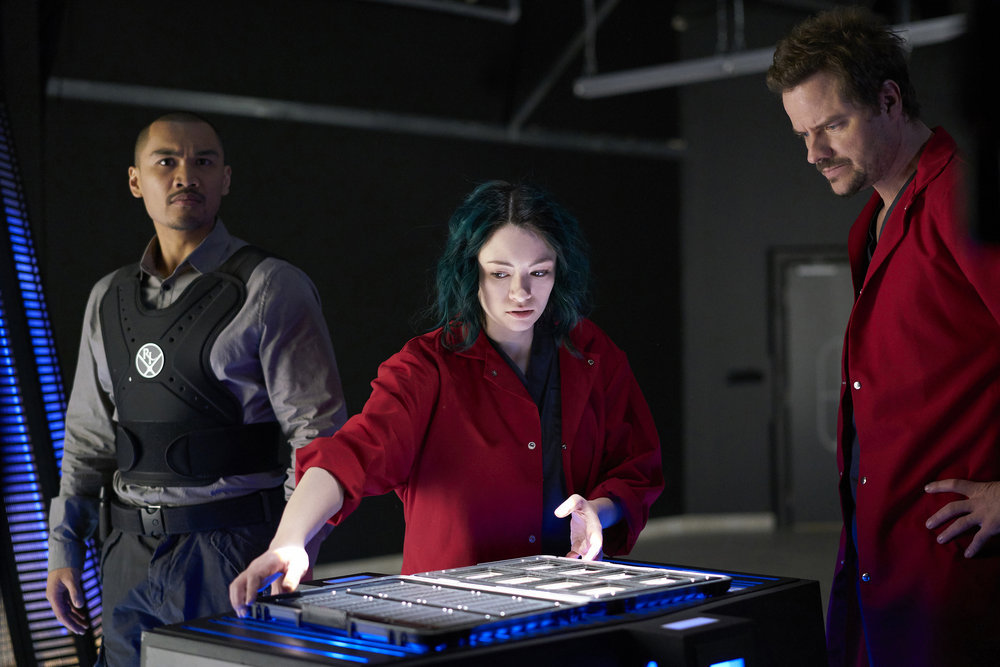 One of our favorite parts of this second season of Dark Matter is a simple thing. It’s figuring out what the titles of the episodes mean and which characters they involve. Favorite so far: “We Voted Not to Space You.” But there’s one or twoÂ coming up thatÂ has a good chance at becomingÂ our new favorite.

Fun fact: Fans were given the chance to help name the episodes before the beginning of the season. It’s a nice touch on DM creator Joseph Mallozzi’s part to include us inÂ on such a fun decision.

Another nice touch is finally learning more about Nyx’s backstory and, of course, it’s twisted and heartbreaking. We knew her instincts were impeccable. Too impeccable. So something had to be up. It turns out, she and her brother, Milo, were part of a group of people kidnapped, drugged and forced into this psychic collective conscious experiment by an evil company looking to use them for their gifts. Think the Borg from the Star Trek: TNG universe. But they’re human. And they’re not up to no good. They’re being used and abused. And it’s just so incredibly sad.

Nyx played puppet master in order for the Raza Crew to unknowingly rescue her brother from the clutches of Electus. In the end, he gave himself up in order to keep everyone safe. But he knew he couldn’t go back under so he killed himself. HEARTBREAKING. Even though we didn’t know Nyx’s brother for long, his loss was felt. She’s definitely feeling the loss but it’s unclear whether she understands what kind of mindset her brother was in when he returned to Electus. Don’t think she does, which means there’s more pain in her future when she finds out he’s gone.

Meanwhile, Devon seems like he’s a full on drug addict. And then there’s Two. At the very end of “We Should Have Seen This Coming,” she looked shaky. What is going on with her? Inquiring minds want to know.

Official Synopsis for “She’s One of Them Now”

With the help of their handler, Tabor Calchek (David Hewlett), three crew members infiltrate a high-security facility via clone.

Hiatus Helper: The EP and Cast of The 100 Talk Season 4

Parks and Rec Preview: “Gin It Up!” [PHOTOS and VIDEO]