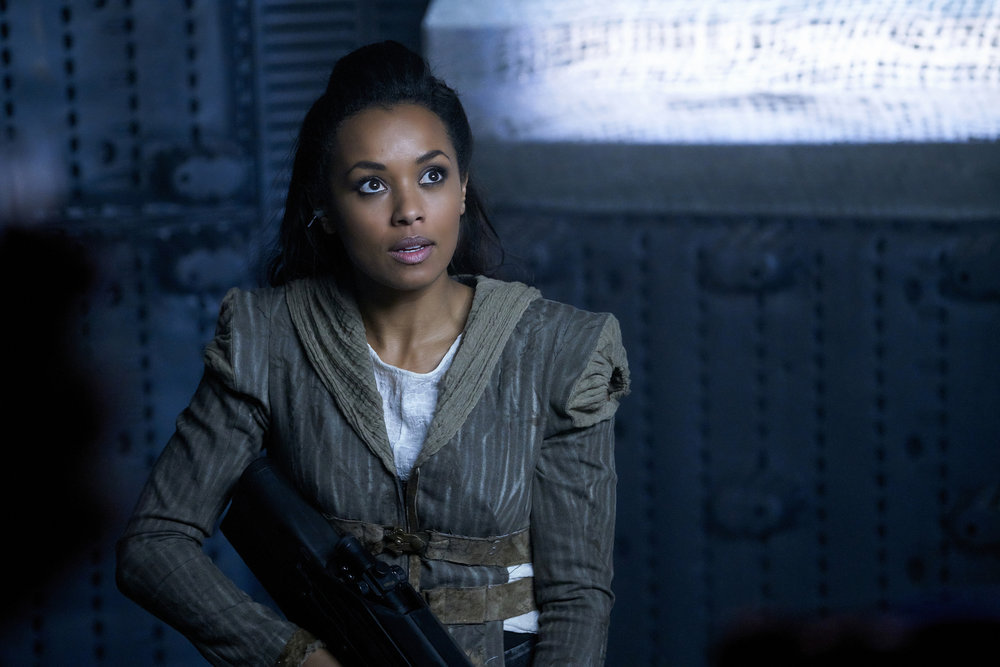 The action and story on Syfy’s Dark Matter keeps getting darker, deeper, richer, better. Season 1 was good. So far, Season 2 is great.

Yes, he’s right. Two has started caring about her makeshift family. But she didn’t give a damn about Corso. She put the cold in cold-blooded and we were here for this. But what did this death cost? There are still questions about who enlisted Corso’s services to off One. Six came up with the CEO running Derrick Moss’ family business. Is it that easy of an answer? Time will tell.

Corso’s death was slightly unexpected. Oh we knew it would happen. Just didn’t realize it would happen so soon. This show is proving to be a bit unpredictable this season, which is so cool.

Offing Jace? Awesome. But what really sent our brains into joy overload last week was the presence of Human-ish Android.

Zoie Palmer must have had so much fun playing this new version. She was so good at it. Human-ish Android didn’t have that childlike innocence. Her thought process seemed to be a little flawed. Not as perfect as it normally is. She’s also highly and infinitelyÂ badass and she got to put that on display. She easily took down all those guys in the bar and nabbed the douche with the info on Jace Corso.

More, please. Much more. So many times Android is taken out of action. This time she got to be the cause of the action and it was glorious.

Palmer talks about the opportunity to play the upgrade

In tonight’s episode we FINALLY find outÂ the origin story for Nyx. Here’s a sneak peek:

Synopsis for “We Should Have Seen This Coming”

Strapped for cash, the crew of the Raza follow Nyxâ€™s (Melanie Liburd) lead on an op, only to find out their target is a personal one.

The addition of Melanie Liburd is paying off for the series. Nyx’s tentative but badass camaraderie with Two is fierce. It feels like she’s building a friendship with Four (you’ll see some of that tonight); and she and Three have this love/hate spark of chemistry going on as well.

But now her character gets fleshed out and we find out about the pain that’s always present in her eyes. It turns out to be a seriously twisted and heartbreaking story.

Guess who gets to spend some quality time together in “We Should Have Seen This Coming?” Only Three and Six. As you all know, Three wants nothing to do with Six. He can’t get past the lies and betrayal. Will they be able to find common ground to get them out of the predicament they find themselves in?

Wondering when we’re going to find out about Devon (Shaun Sipos). Last week it became clear he’s aÂ drug addict or has some sort of dependency on drugs. This week, there are still no answers, although the show does thread this storyline in a little bit. He’s a character that still needs to develop. Hope it happens soon.

The Raza Crew seems to be the universe’s most wanted criminals and outcasts. There isn’t anybody who doesn’t want to see them arrested and/or killed. That continues in tonight’s episode.

And, oh yeah. Watch until the very end. Love how this show doesn’t waste the last 30 seconds of an episode. It usually sets up some newÂ disaster in the making. And we completely, wholeheartedly approve. In fact, we wouldn’t want it any other way.