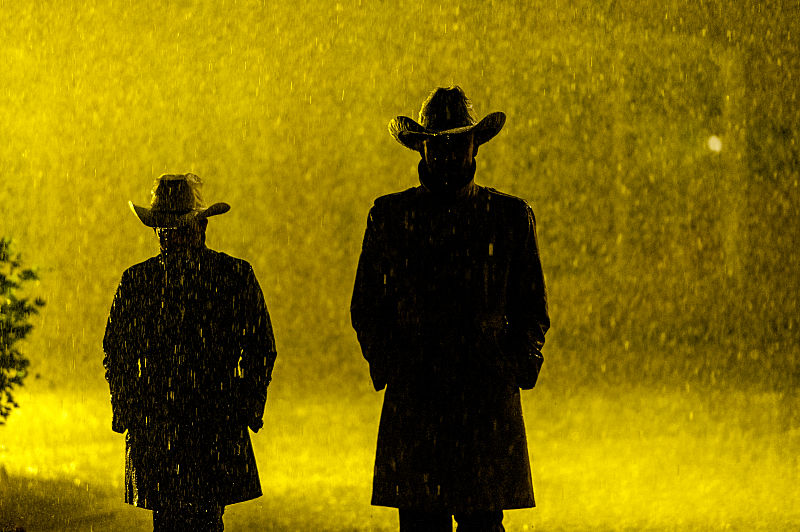 Preacher‘s “Finish the Song” may very well have been the end of the road for one beloved character, but it’s just the beginning for a few others. This episode shows genuine character growth and opens up the lines of communication which allows everyone to throw caution to the wind. While there were several great scenes in “Finish the Song,” nothing deserves more praise than DeBlanc and Fiore and what they mean to each other.

More than just comic relief, these two have been the pulse of the series. Without always being the feature, DeBlanc and Fiore’s mere presence has anchored the story; making it so the audience has to rely on them for answers. What is Genesis? Why do angels walk among us?

Their naive and bumbling nature has made them more human, and we can’t help but feel bad for them when things don’t work out in their favor. Fiore’s childlike mini-tantrum at having to leave his comics behind was such a cute and heartfelt moment. (I’d be upset to have to leave my collection behind too.) But now they’re desperate after their attempt to recapture Genesis proved (ultimately) unsuccessful. Out of time and options, they make their decision with the flip of a coin… Sort of. A coin toss to decide one of the biggest decisions of their “lives” is another small detail that makes this pair so endearing. Fiore carefully packs always all of the things they’ve brought from Heaven and even leaves the radio playing for the Seraphim that is still alive in their motel room bathtub.

These nuanced behaviors have become more frequent as the season has worn on and they’ve now culminated in something so mundane and domestic that we forget these two are angels. However, there’s something about their relationship to each other that raises even more questions. Are they a couple? DeBlanc is always the one to stand up for Fiore, having always seemed like the more seasoned of the two. In “He’s Gone,” Fiore scolded Genesis for misbehaving before DeBlanc corrected him with a firm “No.” They’ve called themselves the entity’s custodians, though there are some fans on a Reddit thread who have another idea entirely about these two.

A theory that gains credence after “Finish the Song” when DeBlanc refuses to let Fiore sleep with the travel agent, and when he reassures Fiore by calling him darling just before they board the bus to Hell. Is their relationship to each other the reason they have always been so reluctant to call Heaven and report in? Regardless, they’ve made a mistake, and they are doing everything they can to correct it before they are caught for unauthorized travel to Earth.

Their coin toss doesn’t go according to plan, but a double or nothing bet produces the option they’d both prefer: Heaven. All that’s left to do now is pick up the phone and call it in. Except Jess has stolen the their direct line to Heaven because he plans to use it to call God himself. With no choice, the duo must continue with their back-up and venture into the underworld.

After a somewhat disorienting sequence (that was entirely too repetitive for my taste), we’re back to The Saint of Killers in the same bar scene that opened the episode. But this time, HELL is displayed across the screen letting us know that these “flashbacks” of the lone cowboy have been him reliving his worst day over and over again in Hell. He’s all business and his no mercy attitude leaves DeBlanc with a bullet between his eyes.

Their back-up plan all along had been to call The Saint of Killers out of Hell in order to get Genesis back. A similar arc to the comics, except Satan himself was the one to release The Saint, which also cost him a bullet to the head. Given the comic history behind The Saint’s special colt .45s, (think along the lines of Ruby’s colt fromÂ Supernatural) I would be very sad to lose DeBlanc at this stage when we’ve just been given a chance to explore his character a bit more. These two angels have been at each other’s side since we’ve met them; from Africa to Russia and eventually to Annville, TX. He’s been the grounding force for Fiore and without someone to metaphorically hold his hand, I’m not sure Fiore will be the same.

I hope this isn’t the end of our angel duo, but if it is, they have certainly been one of my favorite things about watching Preacher each week.

Jesse, Cassidy, Tulip, and even Emily are all-in having crossed lines that have landed them in the positions they’re in now. Next week is the season finale (which we’ve heard is 20 minutes longer than usual, so adjust those DVRs accordingly) and it looks like our trio of criminal misfits is finally going to hit the road in search of God.

Preacher wraps up its first season with “Call and Response,” Sunday, July 31st, at 9/8c on AMC.

BrainDead's Fifth Episode Puts Everyone Back to Work

The Night Of "A Dark Crate"

Moment of Goodness: Holder Gets Played, The Killing “My Lucky Day”

The Blacklist “The Pavlovich Brothers”