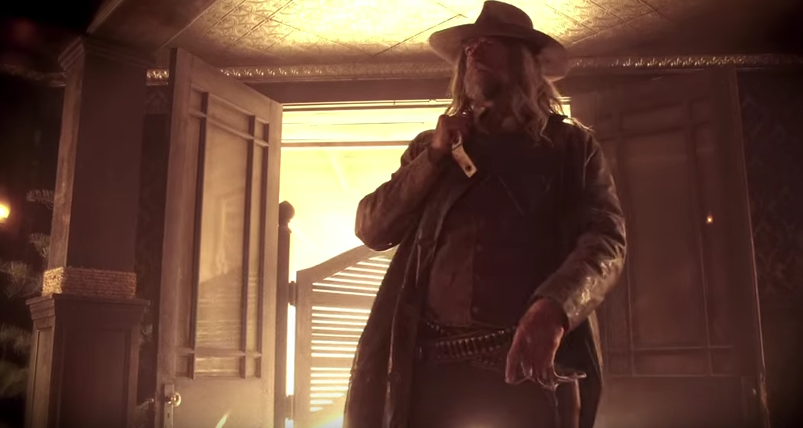 Jesse takes a backseat in this week’s Preacher, leaving room for secondary characters to shine in “Finish the Song.” Emily steps up, and opens up, in a big way, DeBlanc and Fiore steal the show, and The Saint of Killers takes no prisoners.

We get back to the lone rider, The Saint of Killers, in “Finish the Song” as he continues to raise hell in the wake of his wife, child, and horse’s deaths. You haven’t seen merciless until you witness the freight train of vengeance he brings upon the Towne of Ratwater. No one is safe, no one is immune, and no one can escape the reach of his colts.

This opening sequence is just a smattering of the kind of death he brought with him, and shows just how profoundly one bad day can effect one’s soul. As the episode moves along, there will come a point where viewers begin to wonder what is happening. Sort of like a skipping record, we see entire sequences over and over again, which leaves one wondering what is the point of it all. Just as viewers begin to question the validity of the repetition, realization hits and everything we’ve seen about the Saint in the previous 8 episodes brings about a jaw dropping reaction.

Emily and Tulip continue their very new friendship as Tulip asks for a favor. Emily is the quintessential example of a small town girl trapped in an unfulfilling existence. She has three kids, of which the audience has no clue who their father is; she works at the local diner; is in a “relationship” with a man she’s embarrassed by; and has a crush on the most interesting man in town. Emily falls in line, doesn’t kick up a stir, and just goes with the flow. She and Tulip aren’t even in the same solar system.

So it’s refreshing to see a bit of Tulip’s personality rub off on Emily, even if it isn’t exactly legal (or sane). Emily takes a step in a new direction with “Finish The Song” without seeming to stumble or really agonize over her decision. How will new Emily fit into the dysfunctional family that Jesse Custer has amassed?

As for the stars of this episode, DeBlanc and Fiore play naive so well that they’re almost childlike in all they do with neither ever able to do anything quite right. Each week, more and more of their individual personalities has shown through and it has raised some interesting questions. Just what is their relationship to Genesis, because it certainly feels like they’re more than its “custodians.”

Genesis aside, what is their relationship to each other? As noted in one of the clips below, Fiore is against calling Heaven because he’s certain the pair would be separated. Are they more than just friends? Could it be that they came to Earth for Genesis and to escape persecution in Heaven?

This dynamic is enthralling and bears more exploration. Frankly, I’m not sure we will get the chance to see a more in-depth story unfold given their impending trip to Hell. Viewers can certainly expect more than a few surprises in “Finish the Song,” as Preacher moves away from fun-violence and begins to tug at heartstrings instead.

Don’t miss the second to last episode of Preacher‘s first season. “Finish the Song” airs Sunday at 9/8c on AMC. Here are a couple of previews to hold you over until then: