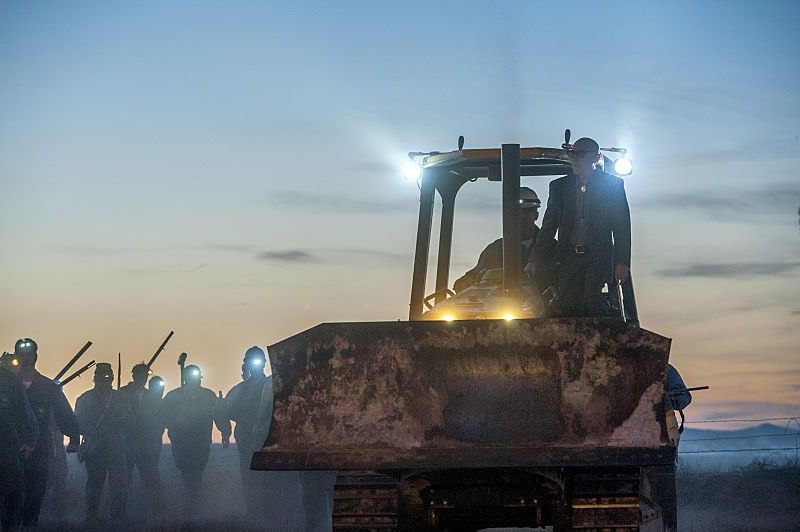 Jesse’s backed himself into a corner after the events of the previous two episodes. The stress and guilt has tipped him over the edge as that oversized ego has been deflated quite significantly. Preacher revs it up again with “El Valero,” giving the audience another gore filled and revealing episode as we inch closer to the season finale.

Remember back in “Monster Swamp,” when papa Custer dragged Jesse out of bed in the middle of the night to head over to Odin Quincannon’s office? We finally get to see the moment when Quincannon became the callous man we know him as. And fair warning, make sure you’ve eaten dinner before the episode airs. You’ll thank us later…

As Jesse sinks deeper into desperation, Quincannon is more determined than ever to take what is his. He’s going to raze All Saints Congressional, and has promised his men the new facility will have a food court.

“But there ain’t gonna be no sushis, chimichangas, or pizza pie, no nothing until you boys march up that hill and drag that preacher out of my church!”

Quincannon and Jesse are both doggedly determined to not let the other get his way, which leads to hilarious sequences of cat and mouse. Eventually, most of the town turns out for this spectacle, which, of course they do because Annville itself is completely dysfunctional. The dry humor and evenly paced dialogue from the Q. M. & P. boys as body parts go flying is reminiscent of a Coen Brothers film, like Fargo, where violence and comedy are so intertwined that it almost feels like we can’t have one without the other.

After a while, the sheriff has to step in, and allows the two “Agents” into the church in the hopes they can talk Jesse down. The preacher begs them to help him figure out a way to get Eugene back after Fiore lets it slip that it is possible to get someone out of hell. But all they’re interested in is Genesis, and don’t seem too keen to help Jesse. Will they do the right thing, or have they been on Earth long enough to have learned how to be cynical?

It’s not all guns and gore, however, as we get to see a much softer side of Tulip and a more forceful side to Emily. If Preacher has taught us anything, it’s that we shouldn’t always trust what’s right in front of us. “El Valero” is, without a doubt, a bloody good time.

Catch this episode of Preacher, “El Valero,” on Sunday, July 17th at 9/8c on AMC. Here’s a preview of the kind of trouble Jesse finds himself in this week.