Dark Matter Preview: “I’ve Seen the Other Side of You” 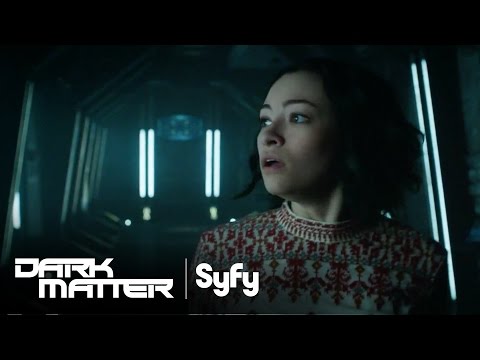 The final 15 minutes of last week’s Dark Matter was satisfyingly action-packed as the Raza Crew staged a prison break.

Two of the moments with the most emotional impact:

1) The Commander Shaddick-led Galactic Authority wanted the Android’s intel. She wasn’t having it or giving it up willingly. They brought Five into the room to get Android to “talk” so to speak. Shaddick even held a gun to Five’s head. But instead of telling her fellow crew member to capitulate, she gave the most unexpected and badass of orders: “Kill them all.” The Android did. And it was epic.

2) Well, we know Six was in a bad place. He betrayed his friends and took his place with the opposition to the crew he had spent so much time with. But he slowly figured out that all was not right with his new world. In the end, he made the wise choice to help his friends escape. He was going to let them leave without him. He simply wanted to make sure he got away. Unfortunately, he had to defend them one last time, and he killed his partner in the Authority but he got seriously hurt in the process. They carted his body on the ship but had to make an impossible decision because they didn’t have the tools to save him. They put his body into stasis. Poor, Six. It was great that he changed his mind and did whatever he could to help his friends. But he paid a price. Let’s hope he’s not out of commission for too long.

Seriously, the final minutes of “Kill Them All,” were some of the best of this series so far. That feeling continues with tonight’s episode. “I’ve Seen the Other Side of You” starts off intense:

And it stays intense the entire hour.

While laying low on the Raza, a computer glitch causes the crew to turn against each other.

We’re not going to give too much away because you need to experience this epic-sode on your own. Here’s what we can tell you:

-It might be our favorite hour of Dark Matter so far
-It all takes place on the ship and is scary intense
-This is Five’s episode. She rules it. It’s great seeing more and more of her badass-ness as the series progresses.
-The newbies to the Raza learn about boundaries. And they’re not exactly happy with what they learn.
-There’s a standoutÂ moment featuring Two and Five that was unexpectedly emotional.