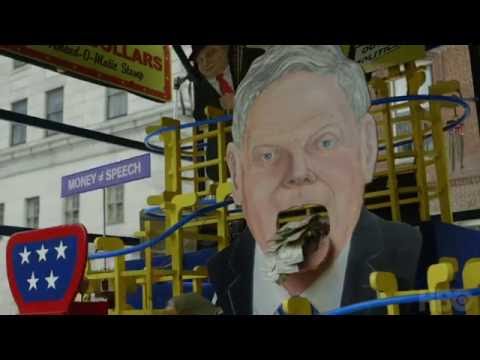 Back in late 2015 there were six candidates vying to be on the democratic ticket for President. Do you remember all of their names? One was Larry Lessig, who you probably don’t know because he didn’t meet the minimum 1% polling threshold to get on the debate stage. But the reason I bring him up because his platform was only about one thing — campaign finance reform. And why is that important? Because the amount of money every candidate — for local, state or federal government — has to raise to run their campaign is astounding and it’s now in the billions (yes BILLIONS) of dollars. So anyone who doesn’t want to see their politicians bought and paid for should be paying attention. But what does spending thousands or millions of dollars get you? Access for sure. But are the big spenders looking for anything else — like favors or breaks?

In Meet the Donors: Does Money Talk? intrepid filmmaker Alexandra Pelosi takes viewers behind the scenes at top-dollar fundraisers and chats with dozens of ultra-rich mega-donors from both political parties to find out why they are pouring millions into the election.

Pelosi asks these billionaires and multi-millionaires about the extent of their contributions and giving philosophies. Democrat Bernard Schwartz says he considers his donations â€œa privilegeâ€¦Iâ€™m investing in something I believe in,â€ adding, â€œI donâ€™t ask for a politician to do what I say. I want them to hear me when I have a problem.â€