Dark Matter Preview: “Kill Them All” 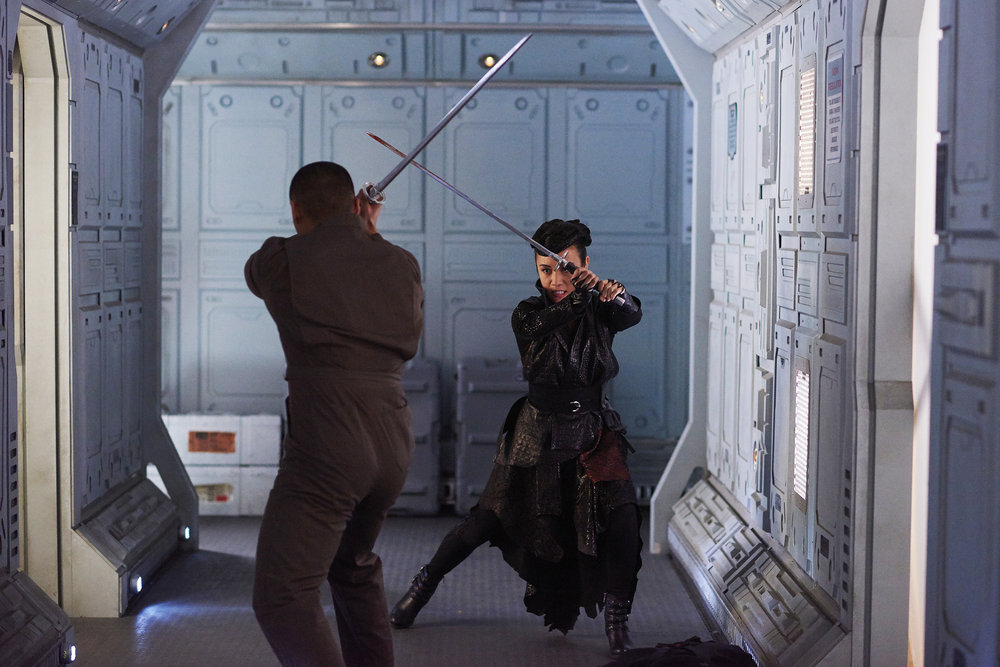 The second season of Syfy’s Dark Matter kicked off with a bang.

Or should we say, with a “bang, bang, you’re dead?” Jace Corso killed his nice guy lookalike. And, yes, One is dead. DMÂ creator Joseph MallozziÂ confirmed it in a recent interview.

Not going to lie, this was unexpected, but it also really raised the stakes on a darker Season 2. Who knows when Corso will pop up again so that means we’ll have to live with that bit of suspense.

In last week’s premiere, the Raza Crew woke up, once again, in an unfamiliar place. Three of them — Two, Three and Four — were put in General Population on Hyperion-8. Five wasn’t imprisoned but she couldn’t quite roam around freeÂ and easyÂ either. And One — until the last seconds of “Welcome to Your New Home” — reconnected with his past. He also made it his priority to dig into the events of his wife’s death.

Meanwhile, Six, had to own up to his betrayal. Five pretty much helped him do that with one heck of a slap. She was so hurt she wanted to make him hurt. HeÂ felt like he did the right thing. After all, he was told he was placed undercover in order to bring the criminals in. He stands for justice, right? It’s complicated. Some of his motives were explained but we’re not sure if he believed what he was saying. After all, these were his friends and criminals or not, he forged a relationship with them.

The Android knows how to take care of herself, too. She’s not about to give up any information and will sacrifice everything to protect her crew. Favorite line of hers from last week: “Let me rephrase. I won’t.” The Galactic Authority be damned. They’re going to have to use some different tactics to get ahold of her intel.

Two new characters on the canvas are Nyx and Devon. We got a better sense of who Nyx is…she’s a badass prisoner who instantly pisses Three off and makes a connection with Two.

Life in gen pop doesn’t go smoothly for the Raza trio, but we know they’re all able to take care of themselves and each other. So no need to worry, right?

In tonight’s Dark Matter, there’s a plan to escape. How will the Raza crew make this happen? And what will go wrong?

Official Syfy Synopsis for “Kill Them All”

Imprisoned in Hyperion-8, the crew must negotiate attempted assassinations, extraditions, and behind-the-scenes machinations as they plot their escape

5 “Kill Them All” Teases

Hell on Wheels Preview: "Any Sum Within Reason"