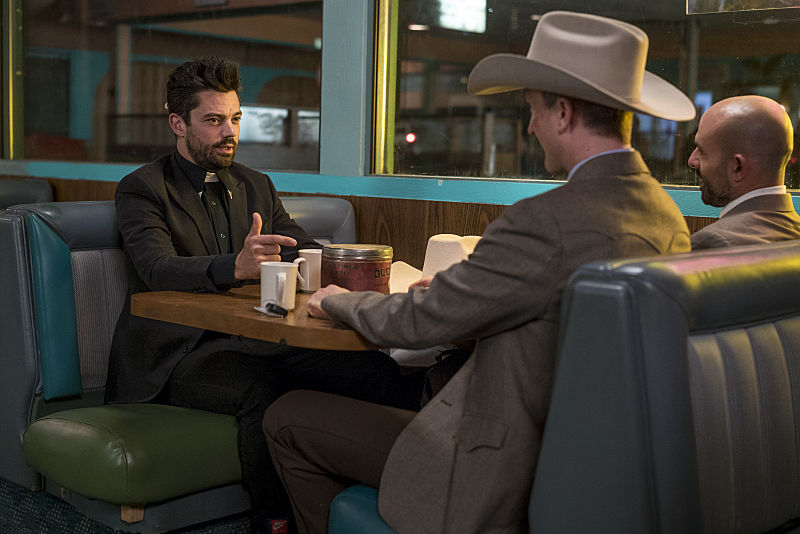 Donnie isn’t the only one who knows there’s something more behind Jesse’s words. Strap in, because “Sundowner” is high octane from start to finish.

Episode six picks up in the diner where we last saw Jesse speaking with angles DeBlanc and Fiore. Here, they’ve finally given a name to the thing inside our preacher, letting him know once and for all that it is not the will of God. Genesis cannot be left unchecked, and as the abomination of half angel/half demon, it must be put back into containment.

We’ve seen so much of our clueless angels in previews for Preacher, and “Sundowner” is where these characters absolutely blossom into more than just comic relief. They are opinionated on the politics of Heaven and we find that there’s far more going on than just a runaway entity. All the cards are on the table as Jesse becomes fully entangled with DeBlanc and Fiore as they all put their heads together on the best way to go about getting Genesis back into its domicile, the coffee can.

But something has changed in Jesse that’s causing his own ego to blind him to the reality of what he’s carrying. His defiance reaches new heights as he firmly sets his mind on “saving this town.” No amount of pleading, yelling, or demanding seem to have any effect on him, which lead to unfathomable consequences.

While Jesse is on an ego trip, Tulip is trying her best to come to grips with the disaster of she and Jesse’s relationship. She and Emily form an interesting bond and things get complicated with Cassidy.

Preacher is back to the action with an episode that kicks practicality in the teeth with hilarious violence and utterly heartbreaking conversations.

“Sundowner” airs Sunday, July 3, at 9/8c on AMC. Here are a few previews of the jam-packed episode.