Game of Thrones “Battle of the Bastards” 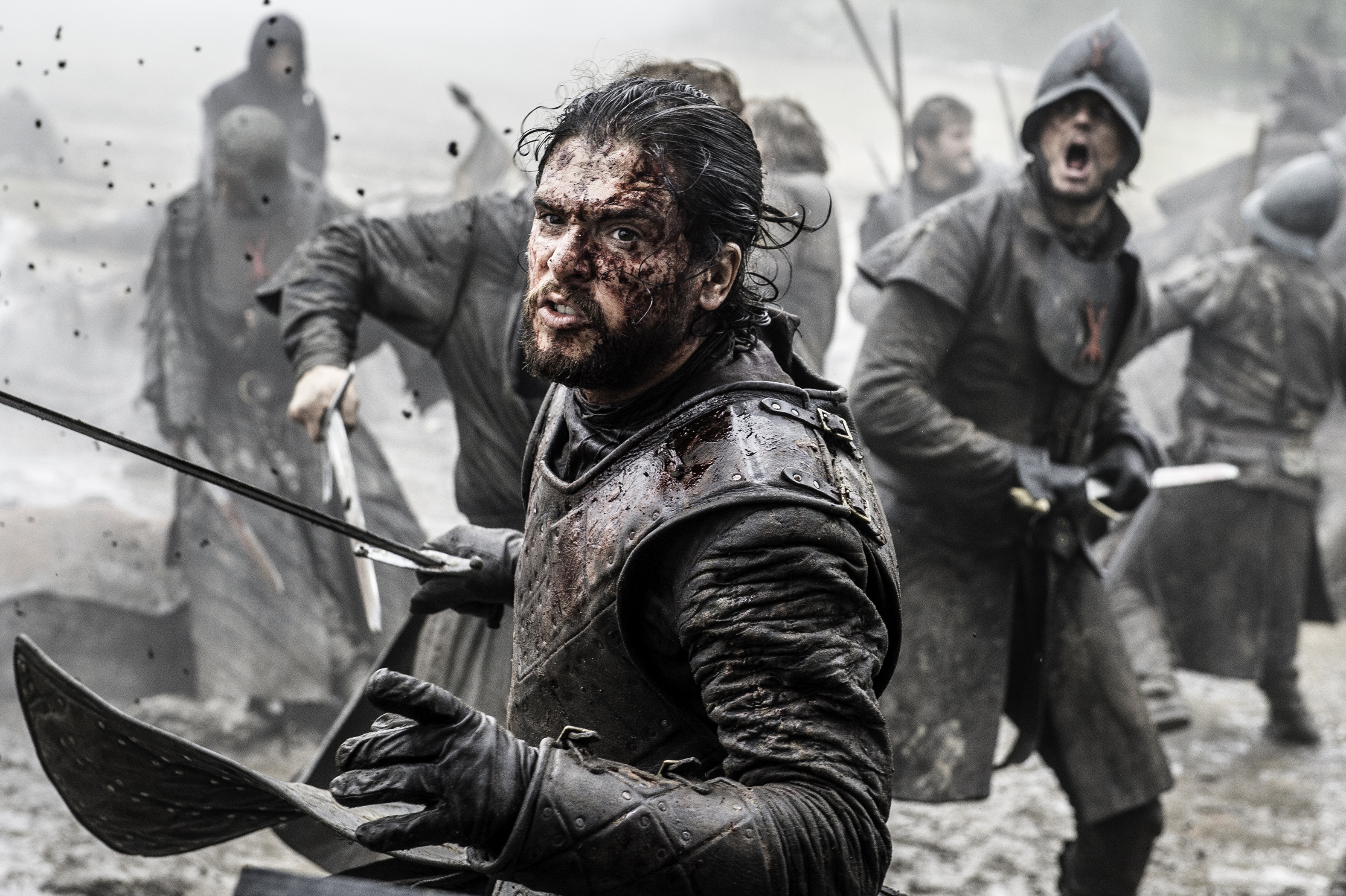 For all of my complaints about Game of Thronesâ€™ inconsistency in quality this season — that the dialogue is weak, the scenes are too pandering, twists too predictable — the show never fails to be fun. Itâ€™s a show that envelopes you, brings you in, and itâ€™s probably the only waking hour of the week Iâ€™m not constantly checking my phone.

And “Battle of the Bastards” was exactly what we expected in a fun, action-centric episode. It was full of special effects, more extras than I can imagine, and it was probably gorier than any Game of Thrones episode ever.

Sure, it was clearly telegraphed that House Arryn would come in to save a failing Stark army. And yes, I wish there were more true plot-based surprises. But the real surprise in “Battle of the Bastards” were the emotional beats, and the payoff we got by singularly focusing on one individualâ€™s experience throughout the main battle, while still never losing sight of what else was happening more broadly. It was a compelling way to raise the stakes for a story weâ€™ve already know the ending of.

Iâ€™ve frequently discussed Sansaâ€™s character development this season (because sheâ€™s a badass). Thereâ€™s always a lot to dig in with her. But Iâ€™ve ignored her counterpart, Jon, a bit, and I think itâ€™s fair to say that the show has too.

Since being brought back to life and reunited with Sansa, Jon Snow has been in the background. He does his duty, stoically moving forward. But “Battle of the Bastards” was the first time we’ve gotten to exist in Jon, to see things through his eyes, in a long time. His anger, fear, and even the physical aspects of going to battle. In what was my favorite part of the episode, we got to experience what it would feel like to get trampled, to gasp for air, to claw upward to avoid suffocation.

In Jonâ€™s final drive into Winterfell (MVP this episode goes to Wun-Wun) he is finally able to channel his rage into Ramsay. And really, there was never any chance Ramsay was going to win in hand-to-hand combat with Jon. Ramsay devolved into a one-dimensional villain after killing his family and he needed to be axed, if only because there was nowhere else to go with him.

Whatâ€™s great is that because we were still seeing through Jonâ€™s eyes, we get to see Ramsayâ€™s fear as Jon blocked each arrow, inching closer and closer to him. It was the most human weâ€™ve ever seen Ramsay act, even more so than when we saw him moments before his hounds ripped him apart, which made his demise that much more satisfying. Not to mention that Jon could have killed Ramsay, but he didnâ€™t. He stopped and looked at Sansa. It was her kill.

The Stark victory feels more like relief than anything else a this point. Winterfell is back to what it should be. We donâ€™t have to suffer with Ramsay. Even Rickonâ€™s death, as harsh as it sounds, from a story perspective, was a relief.

With Aryaâ€™s suggestion that sheâ€™ll be heading home, it seems chapters are rapidly closing to shift focus elsewhere. All we have left is the aftermath of Davos finding Shireenâ€™s remains, a quiet scene in between the chaos. There were no words needed here. I was expecting this to happen, but the silence of it all made the dread that much worse. Melisandreâ€™s faith was restored with Jon Snowâ€™s resurrection, but I donâ€™t know if sheâ€™s sorry about Shireen. She takes no blame nor credit for what her magic does. But I canâ€™t imagine that Davos gives a damn about that.

The siege on Meereen was more of what weâ€™re always used to with Daenerys. Her dragons come in and burn everything up and she continues to overcome ever obstacle easily. For all the emotion in the North, there was none here. Luckily, it still fits in the â€œfunâ€ category, with lots of flirtatious girl-power banter with Yara, Tyrion trash-talking Theon, and some cool aerial shots of Meereen.

But hidden in the fluff was a very interesting reminder from Tyrion about wildfire. We havenâ€™t really talked about wildfire, the green substance that was used back in season two during Blackwater to burn Stannisâ€™ ships. But it was briefly featured in Branâ€™s vision as he gained the Three-Eyed Ravenâ€™s knowledge.

Nothing in Game of Thrones is without reason. We know Cersei is facing difficult times in Kingâ€™s Landing, and although Tyrion is concerned about Daenerys becoming a â€œMad Queen,â€ sheâ€™s not the one who is living in a city with wildfire hidden in every corner.