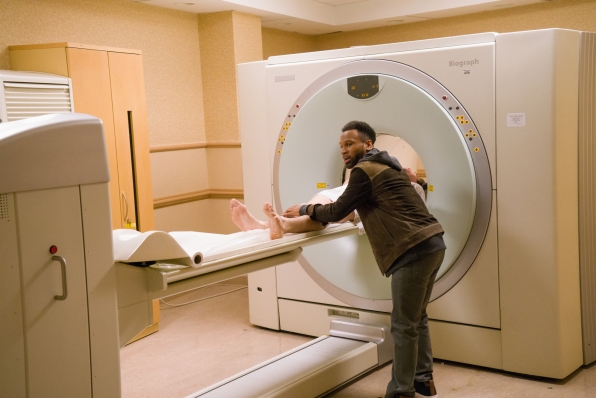 The ambitious yet whimsical thriller-comedy BrainDead came back this week with a generous helping of intriguing plot possibilities, new players, and another exploding head.

It’s always nice when a show can recap in an innovative way and Episode 2 of BrainDead hits all the right notes with a fun little musical rundown of the premiere episode to get viewers up to speed on our alien-bug-infested government. Next, we find out that bug spray doesn’t work (too easy, I guess) as Laurel tries to stave off a rather organized-looking bug procession stalking her around her kitchen. However, shoes *do* work (at least temporarily) as she stomps a couple of them before running off to work.

This suspicion pans out later as she rekindles the flame with Senator Healy in order for the bugs to infect him but her alien-controller is unable to feign genuine interest in physical intimacy and the incredibly hilarious awkwardness of the encounter drives Luke from her bed before the bugs can make their move.

This week’s constituent-du-jour is adorable Annie (Ripley Sobo, Team Umizoomi),Â a terminally ill child who is being prevented from completing a bucket-list tour of national monuments by the D.C. government shut-down. Laurel advocates to her brother on Annie’s behalf and makes a move to steal info from the Republicans via Gareth at the “Tax Prom” (and OMG, yeah, that’s an actual thing – I looked it up) in exchange for getting Annie and her father into the Lincoln Memorial.

We meet Gustav Triplette (Johnny Ray Gill, Harry’s Law) next, schooling multiple opponents simultaneously at the chess tables in the park. One opponent, Oscar (Bobby Moreno, The Good Wife) is bleeding from the ear, a sign of alien-infection, and Gustav gets him to the hospital for CAT scans only to have him start convulsing and – yeah, you guessed it – *ka-blooey*.

Gustav, Â a life-long learner if there ever was one, begins investigating how this could have happened and starts by time-lapse filming a piece of brain matter shrapnel he finds on his own jacket. This set-up captures a solitary alien bug emerging and escaping the sandwich bag he’d put Oscar brain bit in.

This show never lets the viewers forget that it is in Washington, D.C. and the machinations get convoluted in this episode, with Republicans and Democrats alike pulling no punches and suffering no moral remorse, to the point that even innocent little Annie gets used for photo ops and political posturing. Luke is desperate to retain his position as party whip and alien-controlled Republican Senator Wheatus manages to use that desperation (and Gareth’s considerable media skills) to steer him into pitfall after pitfall.

Laurel encounters Rochelle (Nikki M. James, The Good Wife),Â the daughter of the late Dr. Daudier when she brings the CAT scan images of Oscar’s pre-*kablooey* head to Sen. Healy’s office. In them, the alien bugs can clearly be seen. The pieces are starting to come together just as Laurel, Rochelle, Gareth, and Gustav are being drawn together by their individual paths.

The aliens are closing in on our heroine, Laurel. Having missed her brother, they have infected her close friend Abby Summers (Brooke Bloom, Alpha House) who has given up her adventure travels around the world AND a Genius Grant for her novel-writing in order to work for the Republicans. The almost-cartoonish personality changes the aliens affect in their hosts are an effective foil for the ruthless actions they are willing to carry out. Case in point: cardigan-clad Abby turning up The Cars’ “You Might Think” (the aliens’ anthem if you hadn’t cottoned on to it yet) at the end of the episode to drown out her latest victim’s screams while she calmly sips her tea.

Game of Thrones "Battle of the Bastards"

6 Things We Learned In The Arrow Season 4 Premiere