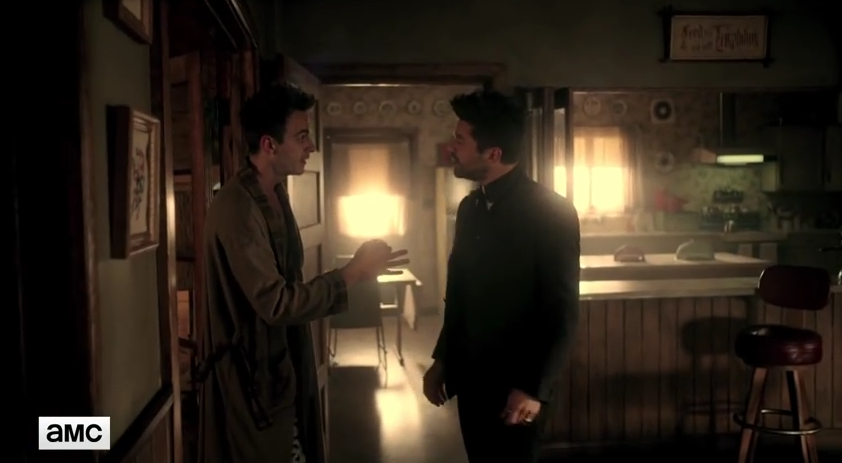 “Monster Swamp” expands on backstory for several of the existing characters we’ve come to like and loathe so far in Preacher. Annville’s problems run deeper than just dysfunctional townspeople; there’s something sinister that seems to bubble up from the ground as well. We first saw evidence of this at the end of the second episode while Jesse and Emily said a few words before laying Ted Reyerson to rest in the cemetery near the church.

Are these just vents strategically placed by Q. M. & P., or are they meant to combat something that started back in the 1880s at the hands of the mysterious Drifter? Whatever the case may be, sinkholes are causing trouble as one of the Toadvine Whorehouse girls, Lacey, is killed after falling into one near the hanged man’s tree. Odin Quincannon gives a “speech” while the sheriff is having the body removed. In true head-scratching fashion, Tulip seems to be the only person that refuses to buy his sincerity.

“Thank y’all for coming out today. There’s some lessons to be learned. First, you boys need to watch your rough-housing ’cause this is what could happen. And you ladies, if you’re going to be out here in the middle of the night, you need to watch where you’re walking.”

Tulip is incensed at everyone else’s lackadaisical attitude toward the incident. She’s got a temper that is legendary in Annville, and she unleashed it on Clive because of his involvement in Lacey’s death. Except the man who falls out of a window after being beaten by Tulip is not Clive, but Cassidy.

The mood is instantly lightened as Cassidy soaks up Tulips apologetic ramblings as he watches her dig herself into a deeper hole. These two may have shared a scene together in the pilot, but this is their first real interaction, and it’s going too be a story for the ages. While at the hospital, Cassidy makes his way to a blood storage container, revealing his true nature to Tulip. We’re left to wonder what the fallout will be from this reveal, but I have a feeling these two are going to get along just fine.

The vampire is in the middle of a drug fueled bender thanks to the cash he pocketed from the two naive angels. They know better than to trust Cassidy, but it doesn’t look like they have many options and they’re running out of time. Context implies they’re here on Earth without permission and they can’t call for help because they’re probably the reason that the entity got loose in the first place.

Meanwhile, Jesse spends the entirety of “Monster Swamp” preparing for the grand sermon he’s got planned for Sunday service. We are treated to flashbacks that show a very disciplined young Jesse who takes pride in his father’s church, while struggling with their strained relationship. His father had been trying to breakthrough with Quincannon and was never successful, which is why Jesse is so fixated on bending the Q. M. & P. man to his will.

Of all the oddballs in this bunch, Quincannon presents the biggest mystery. What happened in his past that has turned him into the quiet tyrant we’ve seen so far? And what did Jesse see when he walked past Odin’s room at the hospital when he was a child? What is it about him that he has such a stranglehold on this town? Jesse manages to lure him to church under the guise of a simple wager: if Odin doesn’t leave a changed man, Jesse will turn over all of his father’s land to Q. M. & P.

“The world is turning to s—. And you know what? It’s all your fault,” he tells the church as he launches into the sermon of his life. It’s hard to tell whether or not this is an ego trip or if Jesse really does believe he’s doing God’s work. I’m willing to bet it’s a little bit of both. After several attempts to convert the hardened Odin without using his power, Jesse finally caves and proves to his congregation that he is capable.

What stood out most about “Monster Swamp” is just how unique all the characters are. Tulip fully embraces her nature and is always turned up to 11; Cassidy has lived long enough to know how to never be bored; and Jesse is fighting an internal battle to rise above his past. The glaring difference is that Jesse seems to be the only one that doesn’t quite know who he is. He keeps telling himself that he’s trying to do what’s right, but by whose standard? Is he trying to fill his father’s shoes or is he really striving to bring people closer to God?

What’s next for Annville now that it’s most powerful person is a believer? Tune in to Preacher next Sunday for “South Will Rise Again” at 9/8c on AMC.

Preacher Gets Stuck in the Doldrums in “Holes”

Get With the Program: The CW’s Reign