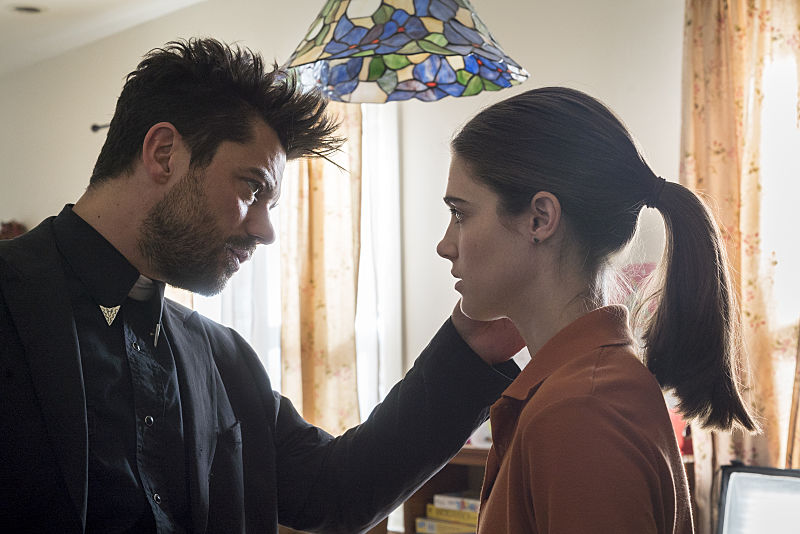 Preacher pulls back in their fourth episode as things finally slow down to allow time for more character development. We get to meet some of the girls from Toadvine Whorehouse, learn that Quincannon is even weirder than we first thought, and get some glimpses into Jesse’s childhood.

Flashbacks give us a look at what it was like growing up in Annville for Jesse as the son of the preacher and Tulip as the daughter of a prostitute. It’s no wonder she can’t understand why Jesse would have come back to this place. Despite what we’ve already seen, Tulip’s temper is legendary in Annville. After an incident with the Q. M. & P. boys, that temper gets the better of Tulip and someone winds up in the hospital.

While Tulip is trying to reconcile her (justified) rage, Cassidy is all in for taking our mysterious duo from Heaven on a ride. Padding his pockets with their severe misjudgement, Cassidy quickly falls back into some vices that land him in a world of hurt. Heaven has put their trust in two angels are outright terrible at their jobs, but Deblanc and Fiore are determined to get what they came for, whether they have permission to be here or not.

Jesse continues to try and reach this town on a more spiritual level and his community outreach is has expanded thanks to some underhanded tactics that neither he nor Emily can really afford to support. Jesse takes redemption to heart in “Monster Swamp” as he preaches the sermon of his life and promises to bring his congregation back to God. Putting his voice to work, our Preacher has expanded his flock but at what cost? Is it really God that he’s bringing them closer to, or does the thing inside him have other plans?

High jinks, unmatched stupidity, unbridled anger, and good intentions collide as more is revealed about how just how dysfunctional Annville and her citizens are.

Watch “Monster Swamp” on AMC, this Sunday, June 19th at 8ET. Here’s a preview of the next episode of Preacher.

Game of Thrones Preview: "Battle of the Bastards"

The Walking Dead Season Finale Preview: “Welcome To The Tombs” [VIDEO and PHOTOS]