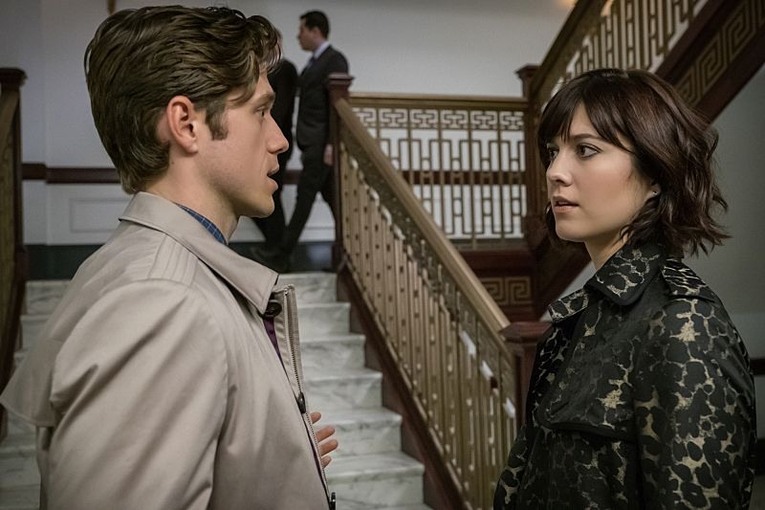 Series premieres often suffer from an overwhelming onslaught of exposition, establishing characters and setting at the expense of plot and action. Happily, Robert and Michelle King, the veteran team that brought us The Good Wife (R.I.P.), which raised the bar on “showing not telling” in the legal drama’s seven seasons on the air, have once again sculpted a program that manages to keep us intrigued, laughing, and slightly squirmy all while setting up backstories and foreshadowing with precision expertise.

The smart moves begin with an opening montage of news clips, political sound bites, and dashboard cam footage that paint with broad strokes the craziness in the world today while implying the introduction of something quite foreign and possibly sinister. Focusing in on D.C., we meet our eyes-and-ears character first, documentary filmmaker Laurel Reed (Mary Elizabeth Winstead, Mercy Street), as she handles family, political groupies, and financial crises at a family dinner party. Her brother, Luke (Danny Pino, Law & Order: SVU), is the Democratic party whip and her father (played by “always-the-smartest-man-in-the-room” Zach Grenier, The Good Wife) is a D.C. insider of the highest order.

Having left the world of politics to the rest of her family, Laurel views the Washington D.C. landscape with the eye of one who knows it too well to want to be a part of it. Nonetheless, she strikes a deal with her father which commits her to six months in her brother’s office, meeting with constituents and addressing their concerns, in order to secure funding for her next film project.

And it is her keen filmmaker’s eye that moves the story forward when it could become sidetracked by the foibles of the political players, idiosyncratic constituents, and interpersonal issues. As the Senate moves into a government shutdown, enter Gareth Ritter (Aaron Tveit, Graceland), Guy Friday to Republican Senator Red Wheatus (Tony Shalhoub, Monk), a perpetually inebriated and hormonal “old-school” politician.

Gareth is looking to puppeteer an end to the government shutdown and approaches Laurel as “the sister” rather than in her capacity as a staffer, thinking it’ll be more covert and convincing. Together, they manage to bring the two sides together on a handshake deal which would have worked if the aliens hadn’t interfered.

Oh, did I forget to mention the aliens? Right, so a meteorite lands in Russia at the beginning of the episode. As we meet Luke Reed in Laurel’s opening scenes, he’s on the phone, telling a Smithsonian scientistÂ that he’ll need to find a cheaper way to recover this meteorite.

As Laurel begins meeting with Luke’s constituents, she is approached by the wife of a sailor (Nilaja Sun, Madam Secretary) who claims her husband has come back different after he was attacked by “something” being transported in a container for the Smithsonian. When Laurel goes to investigate, her “spidey” senses are tripped by the odd, uniform response from everyone aboard the ship and how everyone seems to be staring at her.

The aliens are parasiticÂ insects that infect the human hosts by taking over their brain. If you let them. If you fight the invasion, they cause your head to explode instead. Yeah. Again, the fact that everything we know about the aliens is seamlessly shuffled into Laurel’s first few days of work without tedious exposition is a tribute to the writers’ skill and some innovative camera work, utilizing security feeds and television clips shown in the background, echoing the documentary film style that Laurel would use in her profession.

So what do we have with BrainDead so far? We have a political thriller with an actual alien threat (which has a penchant for The Cars’ music) tied in with the real-life insanity of the current election issues and personalities. We have a rather delightful melding of The West WingÂ with Mars Attacks! (1996) and shades of Evolution (2001) thrown in for a little “ick” factor.

It’s an ambitious project to be sure, balancing the threat of mass mind-control with the rather surreal invasion from space. We have humorous, flawed characters with realistic relationships and dilemmas. We have an industry outsider who may be the only one able to look closely enough at what’s going on around her to save the world. I look forward to meeting the rest of this Scooby gang and seeing who breaks out the first can of Raid(TM) and whoop-ass on these buggers.