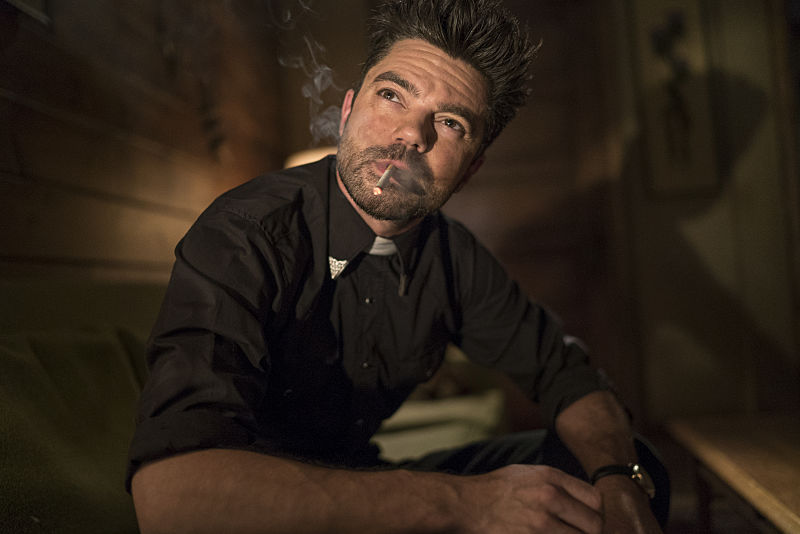 In this third episode of Preacher, we’re gifted some insight into the players we’ve already met while even more are introduced that are shrouded in mystery. “The Possibilities” rides out a slow burn, giving its audience time to really sink their teeth into the series. Small moments of levity highlight the uniqueness of these characters, solidifying our interest in where this is heading.

Jesse and Cassidy’s interactions are some of the funniest and most human (which is ironic given Cassidy is a 109 year old vampire) moments in the series. It’s hilarious, the silly things they do as Jesse explains that he feels like he’s got “all of God’s creation” inside of him, their boys-will-be-boys moment. Despite Cassidy providing most of the comic relief, there’s a sort of sinister idiot just below the surface.

When he can’t convince Jesse to use this power for their own personal gain, later in the episode, he manages to convince the angels (What else do we call them since psychos from Heaven sounds a bit harsh?) to let him bring Jesse to them. He clearly doesn’t know what he’s getting into, but it should be fun to see how many crazy, gruesome ways this pair is killed off before they show up again. After another altercation with Cassidy, these two finally come clean about being from Heaven and needing to get the power out of Jesse. Following the will of God is a thread that ties a lot of Preacher together, but what all does that entail? Just because these two (who happen to be pretty terrible at their job) are from Heaven, does that mean we should be on their side? Jesse is trying his hardest to spread the word of God, but appears to be having trouble as well.

As Tulip’s story unfolds, we see she’s more than just a selfish criminal. She and Jesse were betrayed by a former friend of theirs, Carlos, and it’s a slight that Tulip can’t let slide. Declaring that moment of betrayal is what changed her life, she’s absolutely hellbent on closing this door to her past. That mission for vengeance firmly involves Jesse, no matter how much he tries to stay out of it. Once he finally listened about her having found a lead on Carlos, his defiant stubbornness finally broke and he agreed to leave with her.

It was as if that bit of information was the thin line separating Jesse from returning to his old self. Of all the demons he’s kept at bay, turns out Carlos and the job that went wrong weren’t as easily forgotten. Yet before they make it far enough, Donnie confronts Jesse in a gas station bathroom. Firmly in the acceptance phase of falling back into his old ways, Donnie is in for a rude awakening.

These two never got along to begin with, so Jesse relishes the opportunity to put Donnie in his place once again. Fueled by the embarrassment of being emasculated both by Jesse and his boss at Quincannon Meat & Power, Donne attempts to make Jesse squeal and beg for his life. However, the confidence that Jesse carries with this entity inside makes it very easy to subdue Donnie without lifting a finger. “Cops find your body, I’ll make it look like a suicide. There’s no need for the whole town to know I beat you like a b**** twice.” It’s a fantastic line and seems like Jesse’s transition to a darker self is complete. But in the midst of this power trip, he snaps out of it when he understands that there’s more power in having this ability without using it.

When he tells Tulip’s he’s changed his mind, she’s understandably angry. Though after getting more information on Carlos, her anger is now understandable. She’s hurt that Jesse, once her partner in crime and life, doesn’t seem to care about “making things right.”

Sociopaths, vampires, megalomaniacs, zealots, and now angels — Preacher is packed with misfits following their own sets of marching orders. As we delve deeper into their world, we’re finding more and more that these people are united by their complexities. What remains to be seen is whether or not Annville is big enough to hold all of these wild personalities.

Tune in for “The Serve” as Preacher returns next Sunday, June 19th at 9/8c on AMC.

3 Moments of Goodness from Game of Thrones "No One"

Lost Girl “Of All the Gin Joints”