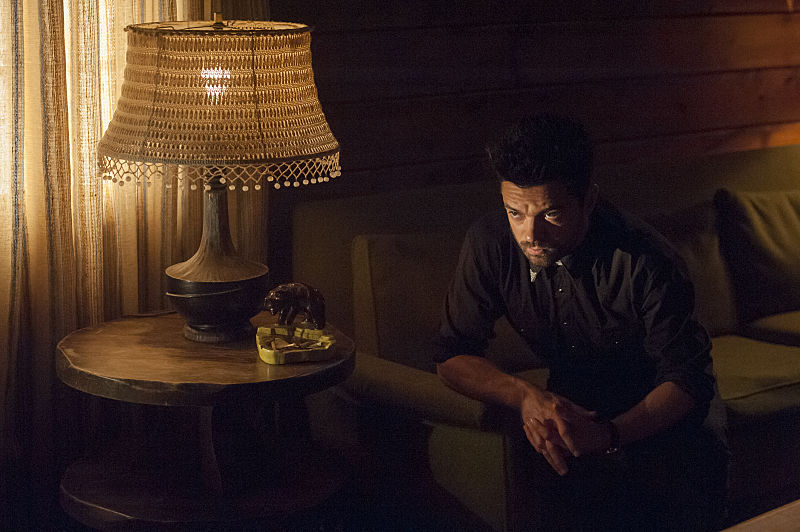 We’re on the move as Preacher takes us on a road trip from Annville to Houston, where we’re treated to flashbacks that provide a better understanding of the kind of trouble Tulip and Jesse used to find themselves in.

“The Possibilities” opens up and allows for a deeper look into characters large and small. Tulip and Jesse’s relationship has seen some major low points, but no matter how much Jesse tries to distance himself from her and their past, it always finds a way to catch up to him. Tulip makes good on her word to keep asking for Jesse’s help on this job, and Jesse’s resolve is beginning to wear thin.

In the process, he’s tested and pushes his newfound ability to a threshold he’s not sure he should cross. As far as boundaries are concerned, Tulip doesn’t appear to have any, which adds depth to the relationship that looms over them. Their stark contrast has a tendency to feel misplaced or forced, but the flashbacks are slowly starting to reveal the Jesse that Tulip knows best. A Jesse who seems every bit the brooding bad man we keep hearing about. While not romantically involved anymore, it’s clear to see that “it’s complicated” is a perfect way to describe these two.

As Jesse and Tulip delve deeper into complications, Jesse and Cassidy seem to be falling into an easy friendship like two best mates (as Cassidy describes them) who get into the kind of shenanigans one expects play out in a frat house. Yet it seems no matter how hard Jesse tries to stay on the right side of good, he’s being pulled in the opposite direction from all sides. Cassidy makes some sinister deals, unbeknownst to Jesse, which are sure to land the pair in hot water.

Life in Annville continues on its own terms as the rest of the town lives out the repercussions of Jesse’s words. Preacher slows down and let’s the viewer breathe in this third episode. While there are no chainsaws in church moments this week, writer Chris Kelley and director Scott Winant still have a few surprises up their sleeve.

Catch an all new episode of Preacher at 9/8c, Sunday, June 12, on AMC. Here’s a clip of “The Possibilities.”

Game of Thrones Preview: "No One"