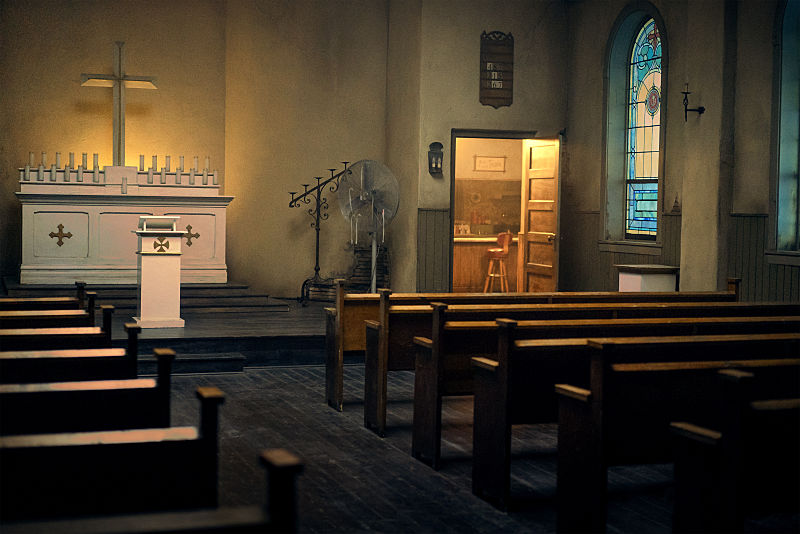 Preacher continues to march to the beat of its own drum. It doesn’t take itself seriously, allowing for a seamless blend of violence, inappropriate humor, and a genuine undertone of people trying to find their way in a world where we’re not in control. The follow-up episode to a wild pilot delivers just as much action and even more burning questions. “See” expands on this unique world, but three particular moments stood out more than the rest.

As brief as this scene is, it provides a lot of background on the type of relationship that binds these two main characters. Despite his protests, when Jesse is talking to Tulip, he looks more comfortable than when he’s with his church patrons. Tulip’s persistence and Jesse’s adamant attempt at not being himself provide a tug-of-war that makes it difficult to choose a side. Who is Danny, and what does this map lead to? Why is Tulip so hell-bent on Jesse’s help and no one else’s?

Whatever it is Tulip is after, it’s important enough that she’s making the effort to sabotage Jesse’s life. Interrupting his baptisms, taking the steering wheel from his truck (subsequently asking if Jesus took the wheel, ha!), then tasing him and putting him in a chain in a whorehouse where she plays poker — Tulip is a powerhouse. Yet for all the ways she asserts her dominance, she cannot move forward until Jesse agrees to help her.

This early in Preacher, it’s easy to want Jesse to say yes to Tulip because it’s sure to lead to something big.

How can anyone have sympathy for a pedophile? Linus (Ptolemy Slocum) has openly admitting to having inappropriate thoughts about one of the little girls that rides the school bus he drives, and he feels like having confessed his urges to Jesse has wiped his soul clean. Yet after Tulip telling Jesse he couldn’t fight his nature, and Eugene/Arseface asking if people really could change, something within Jesse snaps.

He breaks into Linus’ home with every intention to beat repentance into the would-be molester. Jesse walks right up to Linus while he’s flossing in his bathroom and punches him in the face. He sits Linus on the side of the tub and lets only the hot water run. Jesse then proceeds to calmly take his jacket off, hang it on a hanger, then roll up his sleeves before setting to “making it work this time.”

Here’s where we get a glimpse of the Jesse that Tulip is after. This Jesse is cold, ruthless, and worst of all, righteous. Seems like that was the perfect combination for the entity that lives inside him, because on the third time he told Linus to “forget her,” it worked. Jesse is terrified and appears to take in the whole situation for the first time. While Linus has no idea what’s happened, Jesse knows that what he’s just done is a whole other beast entirely. This pivotal scene is the catalyst for Jesse trying to control what’s inside of him.

Cassidy Redeems Himself, Defiling All Saints Church in the Process

Jesse and Cassidy are like those two old friends who get on each others nerves by arguing about everything, yet promise they’ll see each other the next day like nothing ever happened. It feels like they’re drawn to each other out of sheer curiosity. After seeing Jesse in the bar brawl, Cassidy even asked in the pilot, “What kind of preacher are you?!”

So even though Cassidy stole Jesse’s wallet and truck, it seems like he came back because he couldn’t leave on those kinds of terms. Good thing he came back when he did, because the two very awkward guys who have been chasing this “entity” all over the world are trying to exorcise it from Jesse by chopping him up with a chainsaw.

An over-the-top stylized and flat-out ridiculous fight scene ensues, and it almost feels like Cassidy just can’t help but get into trouble. He’s under the impression these men are vampire hunters, but they couldn’t care less about him when it’s Jesse they’re after. Cassidy beats one of the men to death with a bible (or is it a hymn book?) and kills the other after relieving him of his arm with the chainsaw. Over the top, remember?

Through gun shots, screaming, pews being over turned, and, oh yeah, a chainsaw, Jesse still sleeps through the whole ordeal thanks to the mystery alcohol that he took from Cassidy. In the pilot episode, Cassidy was fighting for his life; but this time, he was fighting for Jesse’s. Despite the absurdity of it all, this could be a turning point for Cassidy and a solidifying of his friendship with Jesse.

If there were room for an honorable mention, it would have to be the scene where we’re introduced to Odin (Jackie Earle Haley) and the Q. M. & P. crew that demolished a couple’s home after the most one-sided business meeting imaginable. There was no context and the only connection to the story was that this is the place where Donnie (Derek Wilson) works.

“See” raised even more questions that the Preacher pilot, but getting a glimpse into Jesse’s dark side provides enough curiosity to want to see where this leads.

Preacher is back with “The Possibilities” on Sunday, June 12, at 9/8c on AMC.

Dancing with the Stars “Season 18 Week 3”