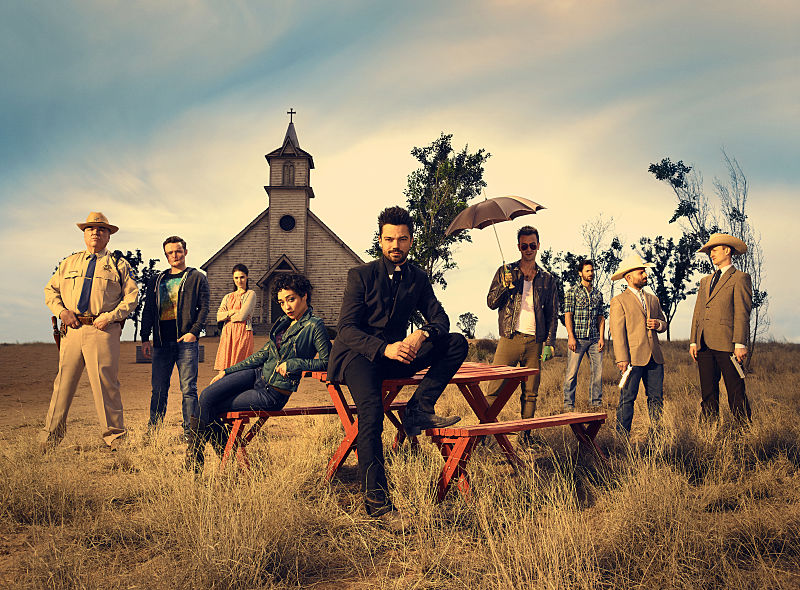 “O generation of vipers, how can ye, being evil, speak good things? For out of the abundance of the heart, the mouth speaketh.” Mathew 12:34 (KJV)

Sticks and stones have nothing on the power that Jesse Custer’s words carry. In the second episode of AMC’s new comic-turned-TV-series Preacher, we get a better taste of what lies just beneath the surface of our small town preacher, Jesse. Suffice it to say, he isn’t filled with the Holy Spirit.

We were introduced to quite a cast of characters in the pilot, paramount of whom being small town Texas preacher, Jesse Custer (Dominic Cooper). He is struggling to do better as he muddles through life trying to keep his past at bay. But when his old flame, Tulip (Ruth Negga) barrels into town with one heck of a homemade bazooka, he begins to question whether or not he’s cut out for leading a congregation. After a bar brawl, he befriends Cassidy (Joseph Gilgun), a jovial Irish vampire, and that’s still not the most interesting thing that happened.

These characters are enthralling in their own right, and it will be interesting to see what sort of dynamic forms as their stories begin to intertwine. Producers Seth Rogen and Evan Goldberg have taken several diversions from the comic already, but taken in stride, the Preacher pilot was fun and left enough hooks to pull the viewer in for more.

The second episode “See,” introduces a couple of new characters that will (presumably) make Jesse’s life a lot more difficult. They are awkward and out-of-place, yet somehow fit right in with the rest of the misfits in Annville, TX. Eugene’s “arseface” is explained, Cassidy’s true intentions are called into question, and Tulip’s determination is put on full display.

In the opening sequence, we are taken back to 1881, where we follow a mysterious lone rider who leaves his family on a mission and runs into a band of travelers. Tension is high and there is something inherently frightening about him even though he doesn’t speak much. Once we’re back to present day, we’re back at the church where Jesse is baptizing members of the congregation. After being inhabited (possessed?) by something, he’s had a change of heart and has decided that he’s going to do what he can to make this church work. He’s got a new sense of pride in his work, and sets out with Emily (Lucy Griffiths) to be a bigger part of the community.

For every step Jesse takes along the high road, someone (or something) looms just behind him to pull him down a notch or two. At the top of the list of people trying to bring him back a peg is Tulip. She’s persistent, unwavering, and just flat out refuses to take no for an answer. She needs his help on a job she’s working, and Jesse Custer will help her whether he likes it or not. Every chance she gets, she tells him exactly the kind of man she knows him to be, and eventually his old self begins to bubble up to the surface.

Tulip isn’t the only person who comes to Annville with baggage. Cassidy and Jesse have a tenuous friendship, with the preacher having given the vagabond the chance to do odd jobs around the church. He lies, steals, and is seen as a lazy drunk because he sleeps all day. They genuinely seem to enjoy each other’s company, though each thinks the other is very strange. One night, their drunken shenanigans leads to one of the most memorable sequences in a church since Kingsmen: The Secret Service.

Whether it’s going through the motions of being saved and baptized or coping with a sick loved one, it feels like Annville is a town of non-believers. One of the themes of the series so far is that a lot of town folk believe that words are just words. All the while, Jesse is trying to come to terms with this new power that has taken up residence inside him. This entity, which killed every other being its inhabited (including Tom Cruise), seems to have found a semi-permanent resting place within our preacher. But because of this thing Jesse carries, when pushed to a certain point, his words carry an unimaginable weight. When the power manifested in the pilot episode, Jesse was unaware; however, he is terrified when it happens again in “See.”

As the episode progresses, he becomes acutely aware of what he can do and begins to test his limits. With nothing ever quite being what it seems, we can’t wait to see how this plays out.

Watch (or re-watch, if you are so inclined) the commercial free pilot before the second episode ofÂ Preacher airs on Sunday, June 5th at 9/8c on AMC.