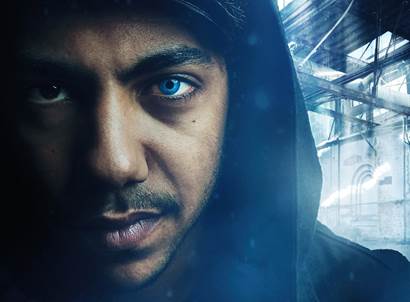 This is a familiar story, even if the details are new. We take a group of people who are reviled — in this case the “Hairies,” who look different, speak a different language and have incredible physical strength — in a society that doesn’t know what to do with them. Most humans make no effort to understand them, but that’s only part of the problem. The Hairies are made to stick to their own kind and when they “escape” into society, they were severely punished. They’re refugees who have nowhere to go, nowhere to hide and almost no one to turn to. Sound familiar? What makes this story unique is the influence of Australian Aboriginal culture. It’s a story we don’t know at all and that’s what makes it so interesting.

In the very near future, creatures from ancient mythology have suddenly emerged and must coexist with humans. Known as â€œHairypeopleâ€ for the matted hair covering their bodies, they have extraordinary strength, speed and longevity but are cast as social misfits and seek refuge in The Zone: a fragile community that finds strength in the brotherhood between Hairy and human.

When a series of violent, unexplained murders terrifies the city, blame for the bloodshed is pointed firmly in the direction of the Hairies. Raids mandated by the Containment Authority â€“ a government-funded body established to capture runaway Hairypeople â€“ threaten the already tenuous peace within The Zone. But other mythical creatures exist in this world â€“ terrifying creatures like the Namorrodor that can rip a personâ€™s heart out.

There is one chosen being â€“ the Cleverman â€“ who has the power to bring these two worlds back together and sees exactly what evil truly lies behind the attacks.

Following the mysterious death of his uncle, Koen West â€“ a young man in denial of his culture and estranged from his family who is far from the model hero that the Hairies and people of The Zone so desperately need â€“ becomes the new Cleverman.

What is a Cleverman?

A Cleverman is an important part of Australian Aboriginal culture. They are often a man of power within the clan. They are the conduit between the Dreaming and this world. There are many types of Cleverman, and each Aboriginal countryâ€™s Cleverman plays a different role.

â€œThe Hairies are visually and spiritually of this land. If you could draw blood from this land it would run through the Hairiesâ€™ veins. The feel and approach to our Hairies is raw, striking, strong, spiritual, ancient and undefinable,â€ says production designer Jake Nash.

The Hairies we encounter in ClevermanÂ are inspired by creatures from stories handed down by Aboriginal people over the last 60,000 years.

InÂ the world of Cleverman, the Hairies live for more than 200 years, and have strength, health and metaphysical awareness. Old age and wisdom are honored, and their journey toward death is spiritually awakening. Physically and spiritually of the earth, the Hairies are regarded as the first inhabitants of Australia.

They share some things with the Indigenous community â€“ a knowledge of land, culture and Dreaming. At the same time, they are a different species from humans â€“ they donâ€™t share the same DNA.

The Hairy community as imagined in this show has as much diversity as any other. There are â€˜shaversâ€™ (those who learn English and choose to remove their hair in order to blend in with society), and â€˜non-shaversâ€™ (those who defiantly live their lives as they always have â€“ covered in a thick coat of hair from head to toe and often speaking traditional language).

The first 2 minutes of Cleverman:

Exclusive clip from the series: