Game of Thrones Preview: “Blood of My Blood” 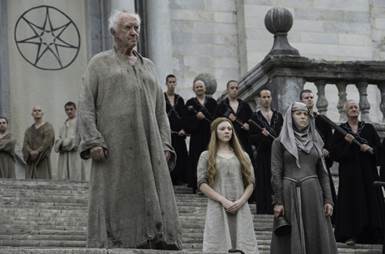 This weekâ€™s Game of Thrones may be titled after a Dothraki saying, but it seems like much of â€œBlood of My Bloodâ€ will actually be spent in Kingâ€™s Landing. Calling the happenings in Kingâ€™s Landing a slow burn is an understatement. But with Margery ready to take her Walk of Atonement, the time for the Lannister-Tyrell coup is upon us. Itâ€™s up in the air how the scheme to attack the High Sparrow and swoop in to save Margery will turn out. Is the High Sparrow expecting turbulence? How will Tommen react? Will Margery actually be saved, or is this going to crash and burn? Weâ€™re guessing the chances of things going as planned are slim.

Over in Bravos, Arya is struggling with her task to kill Lady Crane, while still have some time to catch the afternoon play (this one is about Jofferyâ€™s death!) This is a major turning point for her; if she doesnâ€™t go through with this assassination, Jaqen Hâ€™ghar is certainly done with Arya. And then where is she?

-We get to meet Sam’s family as he and Gilly make it to Horn Hill. Unsurprisingly, Samâ€™s parents might not be so keen on him being with a Wilding girl, solidifying this story has the romcom portion of our show.

-Daenerys is riding away from Vaes Dothrak as the conqueror of the Dothraki, saying â€œI take what is mine.â€ But what are her next steps? Peace is in Meereen, but will it remain when she returns?

-Bran and Meera are in the wilderness trying to outrun The Dead. Bran will have to come to terms with some very heavy realization once he comes to from his Warg trip.

An old foe comes back into the picture. Gilly meets Samâ€™s family. Arya faces a difficult choice. Jaime faces off against the High Sparrow.

Haven Preview: “When the Bough Breaks” [VIDEO and PHOTOS]