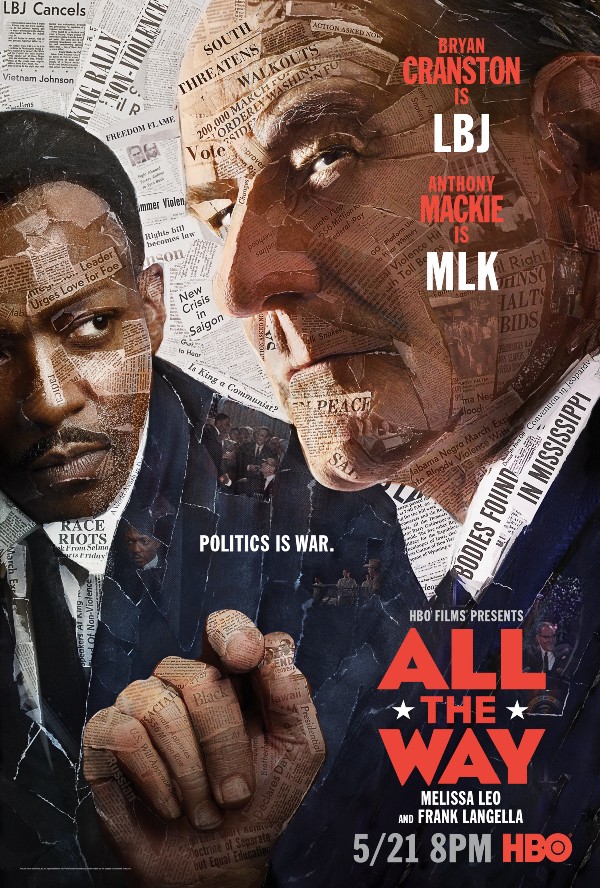 Last week, I attended the Texas premiere of the new HBO film, All the Way, a look at the early years of LBJ’s presidency, hosted by Lyndon B. Johnson Presidential Library in Austin, Texas. Stars Bryan Cranston and Anthony Mackie, director Jay Roach, original playwright Robert Schenkkan, and LBJ biographer and consultant on the film Doris Kearns Goodwin were all in attendance and gave the audience a behind-the-scenes look at the film by participating in a live discussion led by library director Mark K. Updegrove after the screening.

Focusing on the first year of Lyndon B. Johnsonâ€™s presidency,Â All the WayÂ is an engrossing two-plus hours in the trenches of the complexities of the creation of the Civil Rights Act of 1964, and also at times an acute character study of the 36th President of the United States. Written by Schenkkan (and based on his awarding-winning play, also titled All the Way) and directed byÂ RecountÂ andÂ Game ChangeÂ director Roach, HBOâ€™s most recent foray into political dramasÂ shines in its magnificent performances, boasting a cast with serious acting chops.

Cranston is nearly unrecognizable as President Johnson, prosthetic nose, Texas twang, and all. After starring as LBJ in Schenkkanâ€™s play beginning in 2012, Cranston’s experience shows. Heâ€™s the driving force ofÂ All the Way, bringing to screen just how overwhelming, intense, and demanding President Johnson was while constantly injecting humanity into every scene. In the discussion after the premiere ofÂ All the WayÂ at the LBJ Presidential Library, Cranston said he spent a great deal of time at the library researching for the role. It was a letter from Jackie Kennedy to President Johnson five days after her husbandâ€™s assassination thanking him for personally writing letters to each of her children that most greatly influences his performance. â€œIt was really the key to unlock the emotional core of who Lyndon Johnson [was for] me,â€ Cranston said.

â€œThe depth of the compassion that his man had to do what was rightâ€¦that really then gave me the foundation to then build from there to create LBJ.â€

Another actor familiar to Broadway, Mackie does a lovely, nuanced job at portraying one of the most iconic figures in American history, Martin Luther King Jr., a leader stuck between the incremental change promised by the government and the immediate revolution desired by his people. Mackie said, â€œI feel like [Martin Luther King Jr.] is one of the only people in the history of the world where his actions define him much more than the way he looked. I I tried to stay away from the idea of impersonation and capture his essenceâ€¦because thereâ€™s no way of getting it right.â€

The tense partnership portrayed by Cranston and Mackie as President Johnson and MLK is a major tenant ofÂ All the WayÂ and feels especially poignant in todayâ€™s political and racial climate. In many ways,Â All the WayÂ is as much a history of 2016 as it is a peek at the 1960s. When asked about why he had written the play,Â All the WayÂ playwright Schenkkan said, â€œI often think of 1964 and this movie as an origin story for 2016.â€ Today, factioning is bubbling up in both the Democratic and Republican parties and the battle between pragmatism and revolution is still as present as it was in 1964.

Considering the rich, timely story, sharp filming, and excellent performances,Â All the Way’s only short-coming is how overstuffed it is. Though clocking in at 128 minutes, it doesnâ€™t have enough time to devote to all the pieces it starts. There isnâ€™t enough of the brilliant Melissa Leo as Lady Bird Johnson, the side plot of the CIA monitoring of Martin Luther King Jr. feels like an afterthought, and the brief mentions of distress in Vietnam are shoehorned in with no time to breathe.

But in the end,Â All the WayÂ succeeds in taking us back in time to tell a story that shows what can happen when the political process is focused on helping people. Roach said, â€œGood government can do amazing things and LBJ showed us how to do that.â€

Grimm Season 5 Finale Preview: "Beginning of the End, Parts 1 and 2"

The Times (and People) are a Changin', Arrow "Lost in the Flood"