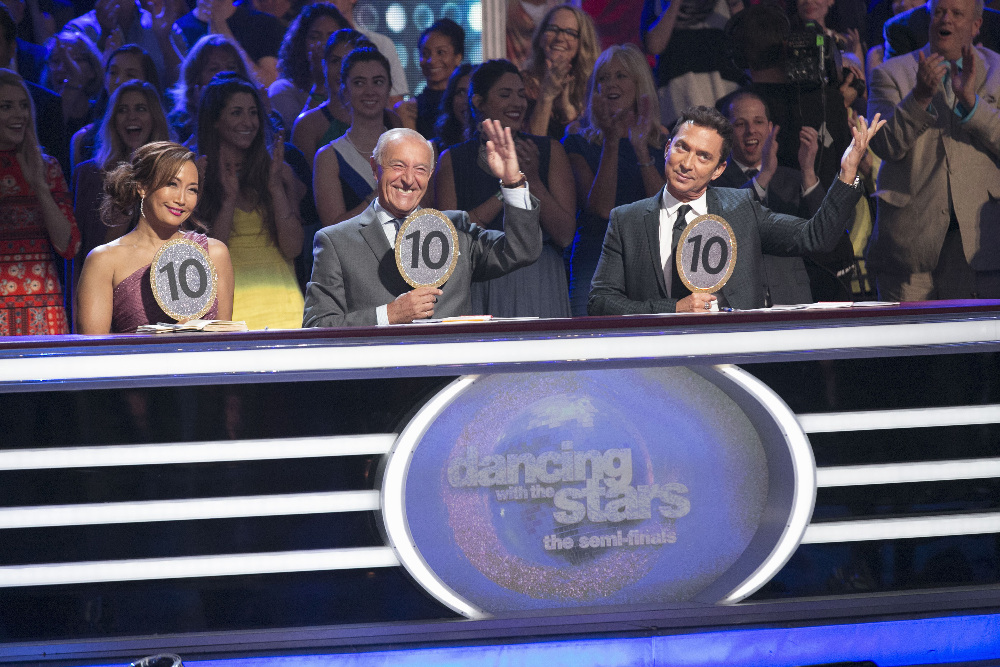 We’re in the home stretch, people! Yes, the Semifinals reigned supreme on ABC’s Dancing with the Stars this week. There was an added challenge: the couples had to perform a Trio dance. Doing well was essential because the scores help determine who will take home the Mirror Ball Trophy. It’s really anyoneâ€™s game. Who crumbled under the pressure? Who rocked their routines? What’s really important here is if the audience will be happy with the finalists. Letâ€™s see how the couples did:

Total for both dances: 59

Total for both dances: 55

Total for both dances: 60

Total for both dances: 57

The moment of truth: Three teams were going to the finals. Two couples would fall short.

That means Wanya & Lindsay and Sharna & Antonio are eliminated. Everyone deserved to be there and it was not an easy choice. I am really sad about Wanya but sometimes the best dancers do not get the Mirror Ball.

Erin: â€œYour peacock feathers are much bigger.â€
Tom: â€œI tell ya, usually to get that awkward suggestive conversation, you have to be watching a Presidential debate.â€
Len: â€œI canâ€™t argue with my wife so I have to argue with you.â€
Len: â€œThank god the music stopped when it did because I didnâ€™t know where you were going.â€
Len: â€œCome on yourself.â€
Tom: â€œWell clearly it got a rise out of him.â€
Bruno: â€œIf you donâ€™t get into the final I will judge in a speedo.â€
Tom: America should feel threatened right now.â€
Tom: â€œHow about the dance?â€

Next week is the two-night finale of Season 22! Didnâ€™t we just begin? Who will be the champions of Season 22? Anything can happen. Remember to vote.

Next week Dancing with the Stars airs Monday night at 8/7c. The finale is set to air Tuesday night at 9/8c on ABC.

The Punishments Fit the Crimes in Lucifer “Sin-Eater”