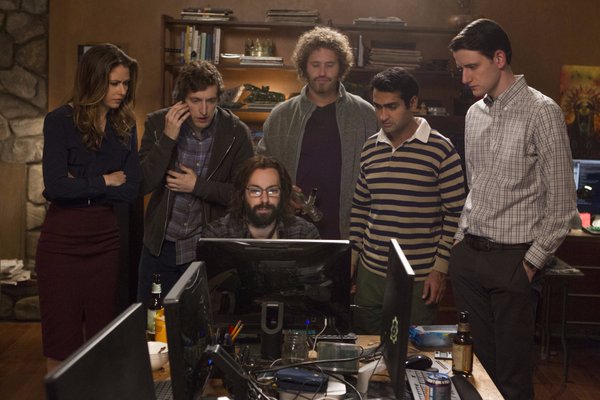 At the end of last week’s Silicon Valley, Richard had a plan. It was one the guys had to go all Ocean’s 11 to accomplish. They were stuck making an appliance when they really wanted to work on the platform that Pied Piper was built on. CEO Jack Barker was making it impossible for them to accomplish this goal.

First, they instituted a skunkworks plan where they created a secret company within a company. And then they went all “Meinertzhagen’s Haversack.” In other words, they still had to act the part. They had to behave like they’ve always behaved in Jack’s presence. So they had to continue to complain about working on the box and they just had to continue to bust Dinesh’s balls over his gold chain purchase.

Poor Dinesh. But he was kind of asking for it. Now that he has a steady salary, he figured he’d spend some of his earnings. Unfortunately, this manifested in such a ridiculously awkward and uncool way. He bought a gold chain. The guys were merciless — even Jared! And when does that happen? Some of the insults:

Jared took it too far, of course, saying something that had to do with Dinesh’s mother choking to death. But, man, they could have unleashed many more gold chain putdowns. Felt bad for Dinesh, but they were awesome.

Things looked super cool for the guys. Their plan was in place. Gilfoyle was back in the fold after quitting and getting wooed with gift after gift. This adventure enabled him to discover how their rivals at End Frame have hired the former Nucleus employees, who cracked the middle-out compression algorithm. They even earned themselves a slo mo walk set to Rick Rossâ€™s â€œYou Know I Got It,” which frankly, never gets old. But because this is them and things can’t go smoothly for more than two hours, when they reach the office, Richard trips and pretty much just hands their skunkworks plan right over to Jack. Oh, Richard.

-Laurie makes a move that affects the future of Pied Piper.

-Big Head falls into another successful situation. How does he do it?

-Unfortunately, there are no more gold chain jokes.

The Newsroom Season 2 Preview: “First Thing We Do, Let’s Kill All the Lawyers” [VIDEO]