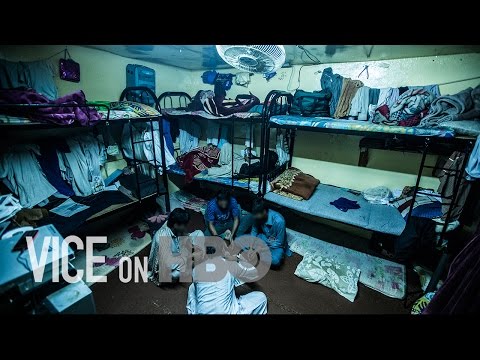 What is a migrant worker to do if the promises made when they were recruited to work outside their county aren’t being met once they get there? On top of that, the workers have to pay a steep fee for their visas and travel only to have their passports confiscated when they arrive. How are these men supposed to repay these fees when they aren’t even earning a living wage? In a country where it’s illegal to strike, is there anything these can workers to do to improve their situation? Are Dubai and the UAE encouraging slave labor? The answer is not encouraging.

The United Arab Emirates, and Dubai in particular, are often described as paradise in the Middle East. But the five million migrant workers who live there and make up more than half the population have an entirely different experience. They live in appalling conditions and regularly end up with nothing, even after years of hard work. Now, as correspondent Ben Anderson investigates, many of them are employed on a project bearing the name of a man who might be the next president.

Is China in the process of colonizing Africa? While it’s true that the continent’s trade dealings with China have helped modernize Africa, what are the government and the people giving up in return? Although China claims a “hands off” policy when it comes to how each country governs itself, we’ve already seen China’s influence come into play at the United Nation; more often than not, Africa sides with China. Does this mean Africa is slowly moving away from democracy?

â€œChina in Africaâ€ description, from HBO:

China is financing more infrastructure projects and selling more goods to Africa than any other trade partner in the world, with a large share of investments linked to the extraction of resources. Correspondent Isobel Yeung heads to the Democratic Republic of the Congo, Kenya and South Africa to meet the characters behind the business deals and explore what this increasingly prominent relationship could mean for the future of global politics.

Superheroes on TV: Self Sacrifice

VIDEO of the Day: Bravo Teases Odd Mom Out Season 2