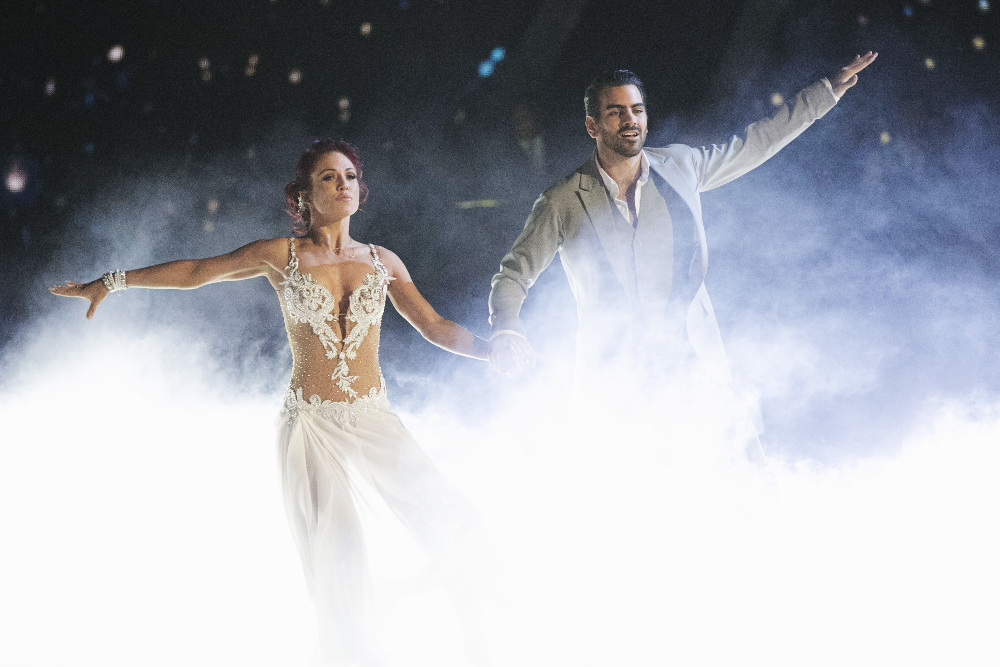 After spending weeks getting into a groove with their partners, a big curve ball was thrown: The Switch Up! America picked the pairings. How did they fair? How did Nyle handle his new partner after being terrific week in week out with Peta? Did his new partner have issues? Did the other new couples gel? The other thing: Maks was back and in full force. You will never believe how he and Len started a bromance. There was some battling going on between the judges. Letâ€™s see how the new configuration of couples did:

This was a mixed bag. There is something that I love about watching Wanya. I thought what they did was well done but I agree with Carrie Ann, that Witney and Wanya donâ€™t have the chemistry that Wanya and Lindsay have. These were his lowest scores.

I really loved the chemistry between Keo and Kim. It was sweet and beautiful. Len and Maks gave them a hard time because they didnâ€™t stay in hold but Keo explained that because of the height difference he thought it would be better if they had more space between them. Clearly there was a difference of opinion based on the scores.

Doug has been improving but I agree with Peta who said he just needs confidence. He’s trying really hard to get the steps. But I agree with Bruno and I think he needs to enjoy and feel the music more.

I thought this was well executed. I still feel that Ginger is slightly awkward but all the judges gave glowing reviews. I feel like Ginger is stronger with the ballroom rather than the Latin dances. But thatâ€™s just my opinion.

I thought that this was fun and strong. America did right with this switch up. Unfortunately, the judges were not really happy with him. I donâ€™t agree and thought they were entertaining. Antonio can be stronger with his technique but that comes with practice.

Doing a sexy dance on switch-up week is always difficult but Sasha was able to get through to Paige and teach her. It was nice to see her being vulnerable considering she is a fighter.

Von gets the steps but I donâ€™t think he was completely committed to the dance. Von seems inconsistent to me in the fact that when he gets it, the dance is great. I just feel like when he dances he has these great moments and then other times he seems to slack.

The word that came to my mind after I watched this dance was stunning. I agree with Carrie Ann that he takes my breath away. Best dance of the night. It was also brought up that because he is deaf, he always hs to use his other senses to tell stories, which actually is an advantage.

Definitely her best dance of the competition and Val was a great match for Jodie. She was in the zone.

Tom: â€œAnd that is what is called not holding back the livid.â€
Len: â€œWhy donâ€™t you boo him? Why me?â€
Tom: â€œLen you happy now, they booed Max, too?â€
Len: â€œThank god youâ€™re here Maks because itâ€™s usually me against the world.â€
Tom: â€œTonightâ€™s program is brought to you by Magnanimous Russian Love Slave.â€
Tom: â€œA few years ago, if you were to tell me that Maks and Len would be paddle buddies, I never would have believed it.â€

There was no elimination because itâ€™s switch-up week. Next up: Famous Dances and the partners will return to their original couples. Remember to vote.

VIDEO of the Day: Tension on CNBC's Billion Dollar Buyer

Nashville “Nobody Knows But Me” and “The Storm Has Just Begun”

Two Takes: Outlander “The Way Out”