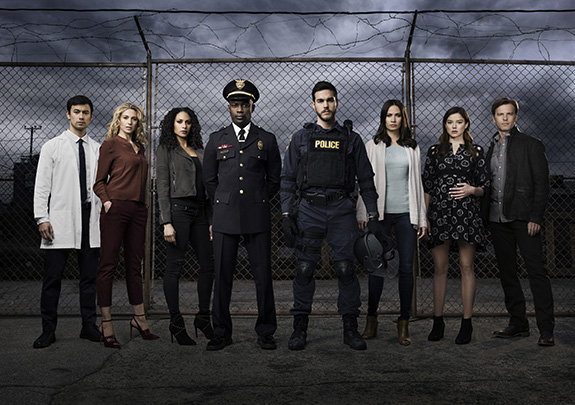 So, I’ve seen the first four episodes and I’m all in. I sincerely hope you’ve got room in your TV viewing schedule for another outbreak drama, because this one is worth your time.

“Pilot” synopsis, from The CW:

When a mysterious and deadly epidemic breaks out in Atlanta, a vast urban quarantine is quickly enforced. Trying to keep the peace on the streets is police officer Lex Carnahan, who has quickly risen through the ranks of the Atlanta PD.Â  But Lexâ€™s job becomes even harder when he learns that his longtime girlfriend, Jana, and his best friend and fellow officer Jake, are trapped within the cordoned area. Also quarantined within viral ground zero is 17-year-old Teresa, who is eight months pregnant and now separated from her boyfriend on the other side; Katie Frank, an elementary school teacher now placed on lockdown with her entire class, including her young son; and CDC researcher Dr. Victor Cannerts, the doctor who initially made the controversial call to quarantine the area and who is now racing to find a cure for the virus. On the outside, Dr. Sabine Lommers leads the government efforts to contain the outbreak and asks for Lexâ€™s help in enforcing the cordon â€“ which grows increasingly difficult as the public trust deteriorates.

TV Goodness had the chance to speak to the cast and EPs at WonderCon last month about everything from the long wait from series pick up to the premiere, potential romances between characters who technically can’t touch, the real-world issues the series tackles, if this is a true “event series” and so much more.

Chris Wood on finding love in the middle of the apocalypse, what the first few episodes have in store for his character, researching his role and what he’d do if this ever happened in real life:

Kristen Gutoskie on being in charge of kids when in crisis and what that means in the first few episodes, how her role changes and a potential romance with Chris Wood’s Jake:

Christina Marie Moses on Jana’s relationship with Lex, conflicts with those around her, how Jana’s difficult childhoodÂ affects how she makes decisions now, how she’s like her character and how close this virus could be to something in the real world:

Hanna Mangan Lawrence and Claudia Black on how the series examines real-world issues, if Dr. Lommers’ character is truth-worthy, the dynamic of the people on both sides of the cordon, seeing different sides of all the characters and how the story unfolds:

Trevor St. John on his character, if his character’s take on events is helping or hurting people, how his character evolves as the season progresses and his adversarial relationship with David Gyasi‘s Lex:

George Young on how his character is dealing with the outbreak and quarantine, the challenge of doing his job and the dynamic between Dr. Lommers and Dr. Cannerts:

EPs Matt CormanÂ and Chris Ord on the logistics of filming, dealing with hot-button issues, adapting and adding new elements to the series and which characters might be fan favorites:

EP Julie Plec on balancing the stories of all the characters on both sides of the cordon, favorite character interactions, bringing love to the apocalypse, if there are any characters whose death was off the table, her favorite relationship on the show and researching this premise:

Containment premieres Tuesday, April 19th at 9/8c on The CW.

Norma Admits Her Truth to Romero in Bates Motel "The Vault"

Romancing the Bro in 12 Monkeys "Year of the Monkey"