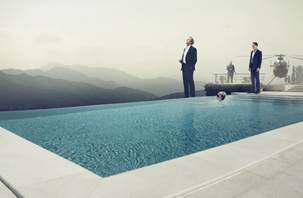 This week is pretty awesomeÂ trailer-wise for pop culture fans. In big screen news, Marvel dropped an epic look at its upcoming Doctor Strange drama. Featuring Benedict Cumberbatch, this teaser does its job well. We can’t wait for November. In fact, time needs to speed up drastically in order for us to see this movie sooner rather than later.

In small screen news, AMC does its part to feed the appetites for all the entertainment junkies out there. The cable network has released a brand new trailer for its highly anticipated mini-series, The Night Manager. Tom Hiddleston a hero? Hugh Laurie a villain? Sign us up for this drama based on John Le CarrÃ©â€™s best-selling novel.

On a shallow note, there’s a shirtless Hiddelston shot that we much appreciate. This project really looks like it could tell us whether the actor who’s known for playing aÂ magnetic villainÂ like Loki has what it takes to become a viable James Bond, n’est-ce pas?

Fans of Marvel and DC may recognize a couple ofÂ faces. Actress Elizabeth Debicki co-stars in a major role. She’s going to be in Guardians of the Galaxy Vol. 2. Meanwhile, actor David Harewood is also featured in the trailer below. The former Homeland star now plays J’onn J’onzz aka Martian Manhunter on CBS’ Supergirl.

A contemporary interpretation of John le CarrÃ©â€™s espionage drama â€“ and the first television adaptation of a le CarrÃ© novel in more than 20 years â€“ The Night Manager will bring together love, loss and revenge in a complex story of modern criminality. The series follows former British soldier Jonathan Pine (Tom Hiddleston) who is recruited by intelligence operative Angela Burr (Olivia Colman) to infiltrate the inner circle of international businessman Richard Onslow Roper (Hugh Laurie) and detonate the unholy alliance he has ministered between the intelligence community and the secret arms trade. To get to the heart of Roperâ€™s vast empire, Pine must withstand the suspicious interrogations of his venal chief of staff Major Corkoran (Tom Hollander) and the allure of Roperâ€™s beautiful girlfriend Jed (Elizabeth Debicki). In his quest to do the right thing, Pine must first become a criminal himself.

Synopsis for Night 1 of The Night Manager

A hotel night manager receives a plea for help from an elegant guest. His actions draw him into the terrifying world of the worst man in the world.

The Night Manager premieres Tuesday, April 19 at 10/9c on AMC.