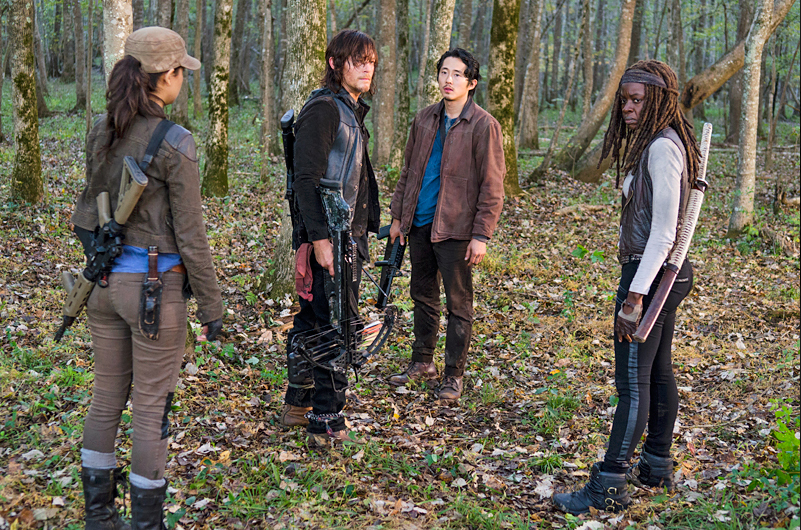 How could the writers leave us with a cliffhanger like that? Now that my jaw has been removed from the floor, let’s talk about the latest installment of The Walking Dead.Â Once again, several members of Rick’s gang found themselves at the mercy of The Saviors, Carol’s gone missing, Maggie may have had a miscarriage, and Daryl’s fate is up in the air.

You know events are about to take a turn for the worse on this show when scenes of people enjoying a nice shower or cuddling in bed together fill you with a overwhelming sense of dread. No one stays happy for long in this world. Alexandria needs to get ready because a serious storm by the name of Negan is coming.

Daryl’s and Carol’s exits from Alexandria made zero sense to me. Let’s think about this for a second. You know that there is a group of people that are going to attack your community sometime in the very near future. You love the people in your group and you would hate to see anything horrible happen to them. So what do you do next? I know, just pack up and leave them behind. Seriously?!

Obviously Daryl wasn’t jumping ship, but his decision to go after Dwight to avenge Denise was not only stupid, but it was incredibly selfish. Daryl should know by now that his family is going to chase after him if he’s clearly walking into a fight he can’t win. Now Daryl’s stupidity has gotten himself shot and Glenn, Michonne, and Rosita captured.

Dwight shooting Daryl was a shocking moment to end the episode on, and I’m sure the shouts of fans could be heard around the world. Still, I couldn’t help but think the showrunner added in Dwight’s “you’ll be alright” to try to ease the minds of the viewers. I wouldn’t rest easy though. Just because killing Daryl seems crazy to do since he’s a fan favorite, doesn’t mean theÂ writers won’t go through with it.

Carol’s decision to leave Alexandria makes sense in theory, but once again I am left scratching my head. This is the zombie apocalypse, it’s either kill or be killed. Sorry to be blunt, but that’s the way it is. No one is saying you have to want or like to kill anyone, but tough decisions need to be made quickly.

It’s not easy to live with the knowledge you have killed people, especially if you have a conscienceÂ like Carol. She seems to be putting herself somewhere on the spectrum between Morgan’s no killing and Rick’s kill first-ask questions later. Carol doesn’t want to kill, and she’ll wait until the absolute last second to do it.

Carol’s fate is also hanging in the balance. It’s unclear whether she is hurt or just ran off, but I hope Morgan is able to find her before it’s too late. At least her disappearance gave Rick and Morgan the chance to open up to one another. I don’t think Rick agrees with Morgan’s philosophy, but he at least understands it.

Maggie’s pregnancy appears to be in danger, and this development is not really a surprise if I’m being honest. People have miscarriages for many reasons but I’m sure the physical and emotional stress of living in this new world isn’t good for a pregnancy. I hope Maggie is going to be okay, but I’m not optimistic for her baby.

Once Upon a Time “Heroes and Villains”

5 Moments of Goodness from Supernatural “Book of the Damned”