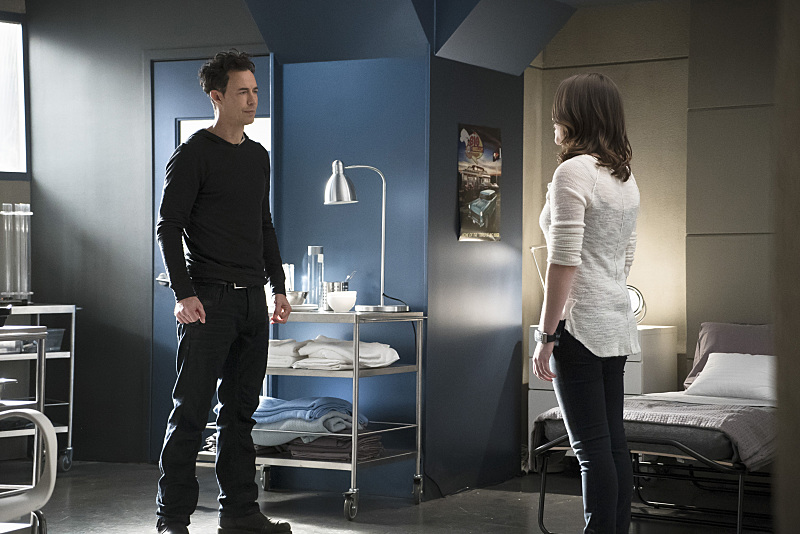 After our own week-long hiatus, we’re back with another Superheroes on TV column! This week, we’re catching up on The Flash and Arrow as our main characters learn just how dangerous good intentions can be.

Good intentions almost always stem from a place of love. We see it on The Flash as Barry tries to get faster so that he can protect his loved ones from Zoom. It is also prevalent in the relationship that Earth 2 Wells has with his daughter, Jesse.

Barry, and everyone else on Team Flash, are still reeling from Jay’s death. They know Zoom is still out there, and even though he can’t get to them at the moment, they are working hard to make sure Barry gets faster. The whole team is obsessed with him becoming fast enough to beat Zoom, so much so that they’re all hiding something in the team’s best interest. Cicso is hiding the fact that he is vibing about Zoom, while Caitlin and Wells are hiding Velocity-9.

The “I did this for you,” mentality is probably one of the most clichÃ©d themes in all forms of entertainment. Because to make decisions on someone else’s behalf is to assume that said person is not capable of making choices for themselves. There are, however, some cases where this applies, like when someone is mentally incapacitated or they’re a child.

I loved that Jesse called her father out on his decisions on her behalf. While it would be difficult for any parent to NOT stand up for their child, Jesse is not comfortable with who her father has become in order to keep her safe. She found out that he’s hurt Barry and is willing to kill to protect her, but that is not something she cannot abide.

In The Flash, good intentions make for a less cohesive team. The sooner they realize this, the sooner they can come together and present a strong front against their enemies. The dynamic has been strained since the trip to Earth 2. But perhaps they’re just going through growing pains, especially with all of the new additions.

However, good intentions on Arrow mean secrets and these secrets seem to carry catastrophic consequences.

Oliver is still reeling from having hidden the biggest secret of his life from Felicity. Keeping from her the fact that he has a son was, for her, unforgivable. He did it with the hope that he’d be able to keep in touch with William, but now he’s lost both his son and his love.

Whether or not I believe Felicity is being too harsh (I do, for the record), I know that she now understands that there will always and forever be secrets between her and Oliver. As long as he has to wear the hood, there will always be a part of himself that he cannot share. Unfortunately for her, that is not something she can accept.

For his part, Oliver says all the things that (he thinks) Felicity wants to hear, but he doesn’t see that what he’s promising is not possible. There will always come a point where he will have to choose between saving a lot of people or saving face with Felicity. Yet again, good intentions get in the way of logic.

Look at what happened between Captain Lance and Laurel. He finally had to come clean about all the things he’d done to help Damien Darhk because he was “under duress.” It’s easy to justify wrongdoing when it means you get to save your daughter’s life.

As the old proverb says, “The road to hell is paved with good intentions.”

My Great Big Binge-Watching Summer: Being Human & Being Mary Jane