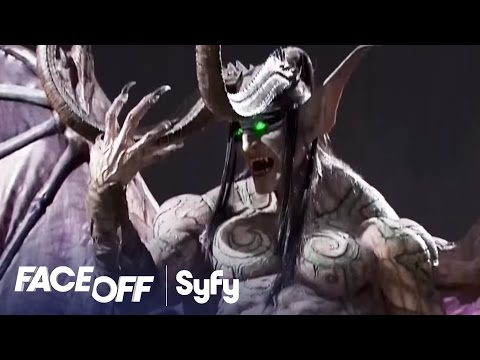 Full disclosure: I know absolutely nothing about the World of Warcraft, so while I was excited to watch this episode I wasn’t sure I’d enjoy it as deeply or be as critical of the makeups as someone who knows and loves this game and this world. Of course I trust Face Off to deliver a great episode either way, so I wasn’t disappointed.

Before we talk about this week’s episode, I want to take a closer look at the 5 remaining artists.

Who has the skills to make it to the end? Who am I hoping will win? Who do I wish we’d see a little more personality from?

As of right now my top pick is Rob. He’s incredibly consistent and has had some of my favorite makeups from the season so far.

I mean, look at this coloring and all the interesting details on this face. This is only part of the reason Rob is my favorite.

Rob absolutely deserved his win for “Smoke and Mirrors.” I love this makeup and his attention to detail is almost always impressive.

I also really like Mel and Melissa. Mel has been inconsistent, but when she’s on she shines. I’d like to see her have a bit more confidence in herself and her work but I think she’s come a long way in this competition. This is an evolution I’ve enjoyed watching and I think she’ll make it to the finale.

I loved Mel and Melissa’s “Foreign Bodies” makeup. It’s so cool and so interesting and they worked very well together for this challenge. It’s gross and cool. What more could you ask for in a “bursting out” makeup?

Melissa is a great artist and I like that she’s willing to take some risks.

I mean look at this incredible detail. I can’t say it’s my favorite makeup from Melissa, but the amount of time and attention she put into this makeup in “Keep One Eye Open” is impressive.

While I like Yvonne, I feel like she doesn’t have as much experience as the rest of the remaining artists. She won a challenge early, but I feel like she coasted a bit before stepping it up and winning another challenge. My biggest issue is that nothing she’s done has blown me away. Don’t get me wrong, I think she’s solid but not spectacular.

Having said that, Yvonne really impressed me with for the makeups she did in “The Gauntlet II.” She made incredibly smart choices with the costuming and her makeups did a great job to fit the challenge.

I don’t know if it’s the editing or not, but it’s been hard for me to get a read on Walter’s personality. I know this competition isn’t about that, but he’s a bit of a blank canvas for me and it’s making it a little difficult for me to really care about whether or not he makes it to the finale. Going on his work alone (which I know I should be doing anyway), I think he’s solid. He’s done a few things I’ve really liked, but he’d also done some things I haven’t.

This is my favorite makeup from Walter. I like the detailed scaling along the top of the head and the paint job is pretty interesting. He’s clearly got skills, but for me he’s never had a top look even though we won the “Bottled Up” challenge with this genie.

Prepare to spend the majority of this episode on the edge of your seat because almost every single one of the remaining artists struggles during this challenge. Here are 3 teases from “The Art of Warcraft”

Face Off airs Wednesdays at 9/8c on Syfy.