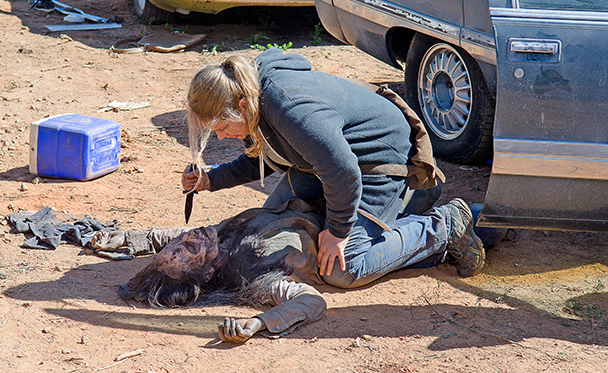 The realization that the latest episode of The Walking Dead, titled “Twice as Far,” would heavily focus on the character of Denise had me worried for her safety. Just when I thought she’d make it out alive, the writers go ahead and kill her. It’s a devastating blow to loseÂ such an endearing character right as the audience is beginning to learn more about her.

Merritt Wever portrayedÂ Denise with a vulnerability and warmth that wasn’tÂ annoying or overly naive. A major gripe I’ve had over the years with this series is the decision to kill off characters during their emotional catharsis or during an episode where the audience finally gets to learn more about their past. I’m not saying this lessens the impact of their deaths, but they hardly come as a surprise anymore.

Denise took a lot of risks that could have all resulted in her death. Denise had been relatively shielded from the changed world while inside Alexandria. Some part of her felt it was time to step outside and test herself. Despite her ability to take care of herself and give Daryl and Rosita a much-needed pep talk about life, she was ultimately taken out by an arrow not meant for her.

The Saviors continue to keep coming, and Daryl was confronted once again by Dwight. The Saviors are supposed to be menacing, but there are times when I doubt their villainy. People like Dwight and Paula are powerful figures to make the audience nervous, but they ultimately remain weak compared to Rick’s group. Perhaps this is being done so Negan’s introduction will be all that more frightening and shocking. The members of The SaviorsÂ we’ve already met are merely the warm-up act.

Denise and Eugene had very similar journeys in this episode. For a long time now, Eugene has been struggling to prove himself to the rest of the group. His relationship with Abraham has been extremely one-sided when it came to physical strength and fighting skills.

The most memorable moment of the episode was Eugene’s decision to bite Dwight’s nether-region. It was a bold, risky move, but it ultimately paid off, and he saved the lives of his friends. This act of balls to the wall (pun completely intended) bravery finally earned him the respect of Abraham, the man he needed it from the most.

I’m still convinced Eugene’s luck will run out eventually. He was able to create a diversion to help his friends, but he was still taken by The Saviors to begin with. He also needed Abraham’s help killing the walker in the abandoned factory. Eugene still has a long way to go beforeÂ he can fully protect himself, but at least he’s already at the point where he would put his life on the line to save the people he cares about.

Lastly, we need to discuss Carol’s decision to leave Alexandria. Over the course of the last few seasons, Carol has developed a natural ability to take command and kill people. Unfortunately, this change in her humanity has left her with a lot of guilt. Carol knows taking out The Saviors will result in a bloodbath, and she’s unwilling to add more names to her kill list.

Still, there’s something missing from this development. I don’t know if we needed more time watching her struggle, but her decision doesn’t fully make sense to me. She’s one of the strongest fighters in Rick’s group, and they will need her help once Negan makes his inevitable entrance. She could very well be leaving her family to die. CarolÂ may not want to kill anymore people, but is she really willing to abandon her family?

Take a look at a sneak peek for the next installment titled “East.”

Dancing with the Stars "Season 22 Episode 1" aka Premiere Week

Bates Motel Preview: "'Til Death Do You Part"

Preacher Opens New Doors with “On Your Knees”

10 Reasons I’m Thankful for the CW