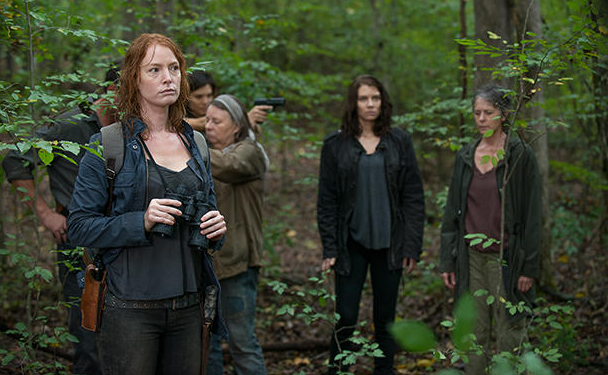 Carol and Maggie are two of the most bad-ass women I’ve watched on television. After being captured by The Saviors, they had to use their wits, emotions, and strength to escape certain death. The latest installment of The Walking Dead, titled “The Same Boat,” gave us an hour focused on Carol, Maggie, and the women holding them captive.

I can’t say enough wonderful things about this hour of television. Rarely do we get to see women pitted against women in a setting like this. Of course The SaviorsÂ were acting under the leadership of Negan, but Paula was clearly a woman who didn’t simply take orders from men. Alicia Witt was absolutely phenomenal portraying a complex, damaged character. I’m just disappointed her character had to be killed off so quickly.

Every interaction between Paula and Carol came with the heavy-handed notion that these two women are the same. This thought is true in many ways, but there’s an important difference between them. Paula’s conscience is completely gone. Carol has been dealing with her own crisis of conscience over the last few episodes. The fact that she’s having this internal struggle means she’s not too far gone yet.

Melissa McBride‘s performance was wonderful. There were times when I wasn’t sure if she wasÂ putting on a show for her captors or if she truly was going through all that emotion. Even though Carol knew the right way to play everyone (hyperventilating, mentioning Maggie’s baby, and using the rosary beads to escape), there was a large part of her that wanted to not have to kill anyone.

While I think it’s important to not lose sight of her humanity, I also don’t want Morgan getting into Carol’s head too much. They are killing people because they have to, not because they want to, and that is what separates Rick’s group from Negan’s group. While Chelle told Maggie that they aren’t the good guys, I don’t fully buy that idea. No one is innocent or unaccountable anymore, but Rick’s group doesn’t want to murder people without a reason. The second the audience doesn’t believe in our core characters anymore, the show is over.

While Carol was facing off with Paula, we had Maggie facing yet another dangerous situation. I kept thinking she was going to have a miscarriage due to all the stress she’s been put through. Maggie’s tough exterior can only go so far, and I’m glad she told Glenn at the end that she was done. It’s time she stops putting herself and her baby in danger by coming along on these missions.

Before deciding to finally slow down, Maggie managed to continue to be the warrior that she’s always been. While Carol wanted to just run, Maggie knew they needed to stay and take out The Saviors. The showdown in the hallway was awesome, and the idea to light them on fire was brilliant. These women don’t need any men to rescue them.

As I mentioned earlier, I loved this female-centric episode. The only male Savior was badly injured, and only whined and lashed out. More often than not, female roles rely on what the male characters tell them. They react rather than act. While I love Rick, Glenn, and Daryl, I appreciate it when the writers focus on the women.

Let’s touch upon this idea that all The Saviors are Negan. This cult-like statement is disconcerting and it worries me that all these people go along with what Negan does. That means they are all willing to take a bullet for him by stating they are Negan. The whole thing had a “I am Spartacus” vibe.

Check out a sneak peek of the next episode titled “Twice As Far.”

The Code Prevails in Bitten "Of Sonders Weight"