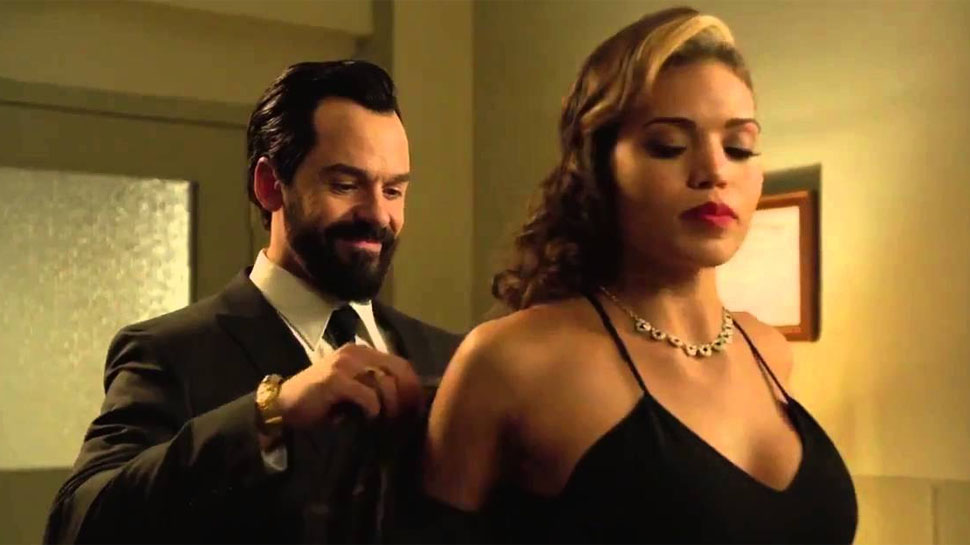 I’ve mentioned before that I love what DC is doing with representation in their shared universe. I’d even go as far as to call shows like Supergirl, Arrow, and especially The Flash progressive in their portrayal of race and sexual orientation. We have yet to see an instance of in-show blow back even though there was plenty of “fan” revolt prior to airdates.

But with most of our steady series’ on hiatus at the moment, this week’s column is all about DC’s Legends of Tomorrow. “Night of the Hawk” takes us back to 1958 where everything is not all sunshine and rainbows.

As we get some background information on Harmony Falls, a small town in Oregon, one thing is glaringly obvious: it’s very white. Instead of just throwing our modern characters into a place where they’ll fit in, the elephant in the room is addressed immediately. In addition to racism being a concern, Sara mentions the privilege of men and straight people too.

I appreciate that the characters didn’t just feign ignorance when the townspeople threw jabs. Kendra and Ray run into strange looks while they are pretending to be an interracial couple. Though I’d imagine for someone who’s been around for 4,000 years, she’d have seen and heard just about every derogatory thing imaginable. When the socialite party-goer asked Kendra for another drink, I wish the retort had been more biting; but showing restraint pulls away from the “angry person-of-color” stereotype. Ray did come to her defense, which almost plays right into the gender tropes of the time. Through the whole ordeal, however, Kendra never withered or showed any kind of weakness.

Sara is finally starting to allow herself to feel things again, and in so doing she helps a closeted woman realize there’s nothing wrong with her; much to Professor Stein’s disdain, I might add. He’s totally against what he thinks is Sara’s “love ’em and leave ’em” attitude, saying that it would be unfair to sexually liberate a woman who is still living in a time where that sort of thing is not tolerated. Yet for the blunt object that Sara can be, she was gentle in planting seeds of dissent into Nurse Carlisle’s mind. There was no call to revolt or buck the system, just a reassurance that she was not weird and didn’t need to feel ashamed of herself.

Perhaps the toughest topic of all was the narrative of Jax being a black man spending time with a white woman. Admittedly, I cringed during the diner scene because I really thought CW was going to take it there by using a slur. Thankfully they didn’t, and as hokey as Legends can be, the serious undertones were there. Later, Jax even made mention of police brutality and the implications of him being “caught” with a bleeding white woman in his car.

Some of the folks in Harmony Falls are a lot more accepting than I’d expected. But I also think it would have been disingenuous for DC’s Legends of Tomorrow to have taken a more hard-line approach in how the characters deal with these situations. I mean, we’ve got heroes like Firestorm, Hawk Girl, and Atom that are showing a bit of fear and trying to tread lightly in a time that is not accepting of their norms.

There’s no shortage of shows on television that address race, gender, and sexual orientation in blunt terms, but I’m glad Legends isn’t one of them. Could they have done a better job? Absolutely. Did this episode leave itself open for a new dialogue on difficult subjects? No, but it didn’t just pretend like these barriers don’t exist. Given the context of the show, I think it was handled well for its audience.

Most importantly, it ended on the message that individuals have the power to learn and not succumb to their bigoted surroundings. “Promise me you’ll get out of this town,” Jax says to Betty before heading back to the Waverider. Now that Sara, Ray, and Kendra have been left behind by the team, we’ll get to see what happens to our future progressives now that they’re stuck in the past. Will the town still be as innocent given all that has happened with Savage and his creations?

DC’s Legends of Tomorrow takes a two week break and returns on Thursday, March 31st, on The CW.