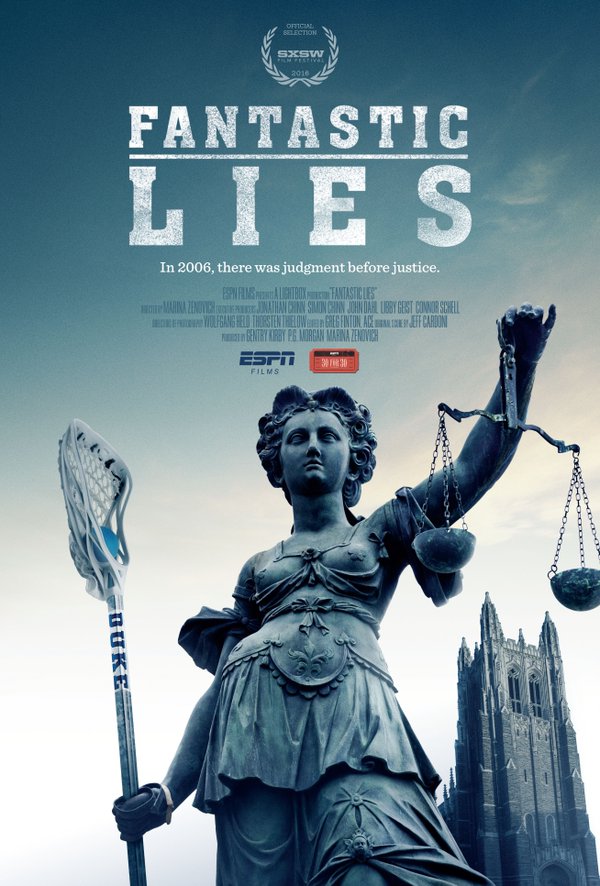 I remember hearing about this case back in 2006. When it made national news, I found myself paying attention for a few reasons. First because, once again, it seemed like a group of privileged athletes were going to get away with something. And second, because I almost went to Duke and was horrified that something like this could happen there (or really on any college campus). I assumed they were guilty, mostly because of the way this story was being reported in the media, but I think partly also because rape and sexual assault on campus is a reality. After watching Fantastic Lies, there’s a lot we can learn about not rushing to judgement. I think we have to believe in the presumed innocence of anyone who is suspected and/or charged with a crime. It’s hard not to let our own prejudices and preconceived notions take over, but we have to try harder and do better for the falsely accused and the innocent.

In Fantastic Lies, director Marina Zenovich takes us back to the night of March 13, 2006, when Duke University lacrosse players threw a team party that ended up changing lives, ruining careers, tarnishing a universityâ€™s reputationÂ and even jeopardizing the future of the sport at the school.Â The film, premieringÂ on the 10thÂ anniversary of the party, revisits an incident that ignited what became a national firestorm and resulted in a highly-charged legal investigation. Usually confined to the sports section, lacrosse suddenly appeared on the front pages of newspapers because of the lurid details of the case and the hot buttons that it pushed: sex, race, class, violence.

I wanted to find out a little bit more about what made director Marina Zenovich interested in this story, how she got theÂ families of the accused to talk to her and what she hopes people will take away from the film. What follows is our email exchange:

TV GOODNESS:Â How did you hear about this story and how did you decide you were going to tell it?

Marina Zenovich: “I read about the story when it happened. I was approached to make the film and felt it would be a compelling documentary.”

TV GOODNESS: The interviews you have with the family members are incredibly powerful. How easy or hard was it to get them to talk to you about this case and how it affected them?

Marina: “It took several months to get them to talk. Initially they said no, but little by little as I got an interview here and there I ended up getting Tricia Dowd to talk and then I got the Seligmanns and Kevin Finnerty. The interviews themselves were very intense and emotional.”

TV GOODNESS: I would have liked to hear Duke Universityâ€™s justifications for their actions, but I know you werenâ€™t able to get any of the administrators to talk on camera. Did they give you reasons for declining or did you just not hear back at all?

Marina: “I met with the communications person at Duke who actually said to me, ‘You need me move than I need you.’ I told him I was well aware of that fact, but that I still wanted an interview. They declined.”

TV GOODNESS: IfÂ they had agreed to be interviewed, what would you have asked them?

Marina: “I would have asked them to explain — step by step — how they heard about the party, how they responded, what they did, who advised them. I would ask for a play-by-play of how they responded internally, how involved their board was. Then I would have them reflect on what, in hindsight, they felt they did wrong. Would they do it different today? I have my set questions that I ask, but then I just work off what people tell me in their answers.”

TV GOODNESS: The media circus really damaged these young men and their reputations. How important was it to tell their stories in this documentary?

Marina: “To me, it was very important to see what can happen in a situation like this and how it can damage reputations and lives.”

TV GOODNESS: What is the one thing you want people to take away from watching the film?

Marina: “We should not be so quick to judge; also do not assume that our elected official are telling the truth.”