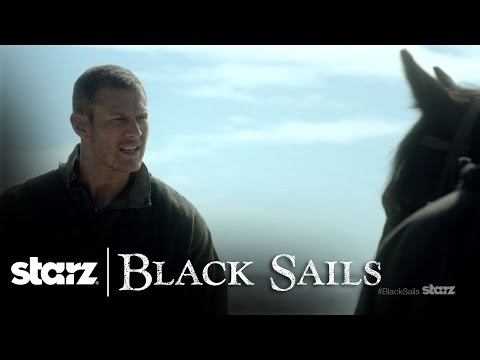 Black Sails “XXVI” tones down the action from last week but keeps usÂ teetering on the edge of a blade with high tension.

Jack learns of his fate as he and Rodgers are transported, along with the cache, to a waiting ship that is to set sail for Havana. Along the route, we are treated to some of Jack’s history in England that provides some perspective into why he behaves (and dresses) the way he does. And when goaded by Jack’s barbs, Rodgers shows his mettle. The Governor is no pushover, and his actions in “XXVI” prove just how far he’s willing to go to avoid war with Spain. But will his efforts be for naught?

Vane and Flint’s alliance is based on securing both Jack and the cache, while Anne only cares about saving Jack. Out of time and options, this fragile team attempts to thwart Rodgers’ plan but the odds don’t appear to be in their favor.

Max and Eleanor seem committed to making this New Providence Island work, but Nassau’s left its mark on them and its old ways are not so easily forgotten. They find themselves turning to former friends in their time of need, conspiring and plotting to do what they believe is in everyone’s best interest. This cunning is something that neither the Governor nor his men should take lightly. The British are newcomers and have thrust themselves into a situation where mountains can be moved in nuanced gestures and whispers.

While Flint and Vane are on the island, Silver and Madi hold their men on the Walrus just out of sight of the beaches. Finally calm after an eventful evening of stomping Dufrense’s face in, Jack could still learn a thing or two from Madi and the way she handles her followers. At this crucial junction, loyalty and respect are two different things entirely. With tempers flaring between the two groups, this crew is hanging by a thread. Can they hold it together long enough to see Flint’s war to victory?

Dissent aboard the Walrus, unrest on the island, and a growing need for vengeance have setup another powerful episode of Black Sails. Tune in to “XXVI” on Saturday at 9/8c on Starz.

Wynonna Earp Preview: “Bury Me With My Guns On”