Once Upon a Time “Souls of the Departed” 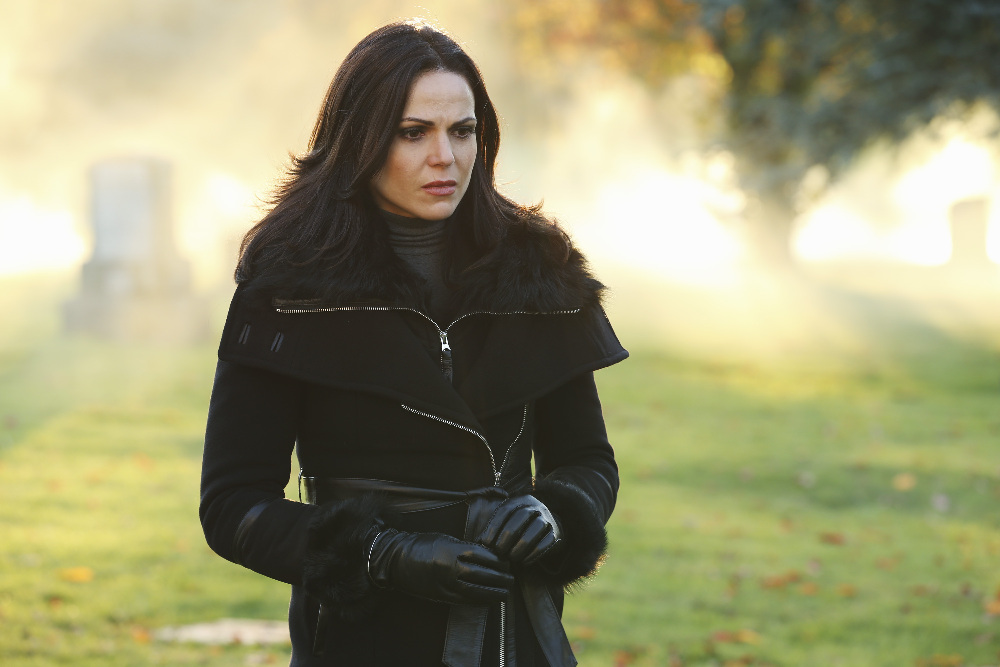 The Underworld takes a familiar place and makes it feelâ€¦ wrong. At the start of “Souls of the Departed” — Once Upon a Time‘s 100th episode — Regina explains that she created Storybrooke from a dark curse, and it was the curse that gave the town its construct. So what was hell on earth in the early days of the show is now hell under the earth. Itâ€™s a fun parallel and I look forward to seeing all the ways they play it up over the course of the season.

There appear to be a lot of hints in this first episode of things to come, or is it things past? We can assume the related characters will be back to visit before seasonâ€™s end. To name just a few, there is the Snow Queenâ€™s Any Given Sunday shop window with the fresh graffiti, the puppets of Jiminy Cricketâ€™s parents in the pawn shop, and Cruella DeVille driving through in her classic car. But Emmaâ€™s yellow Beetle is the one Iâ€™m most curious about. In the Underworld itâ€™s a burned out shell up on blocks, yet in the opening scene of the episode, they made a point of showing it in all its glory in a dream sequence that revisits the day Emma met Neal. On a side note â€“ having that scene set with Playland in the background gave it a delightfully surreal feel. All the brightness and color of a fun fair, yet completely lifeless. That, coupled with the reveal that Emma was actually on the boat to the Underworld gave it a wonderful discordance.

Despite this being Emmaâ€™s quest, this episode spent a lot of time focusing on Regina, and with good reason. Regina is directly responsible for many of these souls being trapped here. She took a good many lives as the Evil Queen, and most were innocent bystanders. This season is sure to test the limits of her transformation from Evil Queen to loyal compatriot. Hereâ€™s hoping her new-found moral code can withstand the scrutiny. It appears to be â€˜so far, so goodâ€™ with her for now. She faces down both of her parents in this episode, and through it, she shows that her mother no longer controls her actions. She also gets the opportunity to apologize to her father for the things she did to him. Henry Sr. has always done what he thought was best, and received nothing but abuse for his actions. Both Cora and Regina treated him badly and he bore it all with patience and humility. The man didnâ€™t deserve all he received, and itâ€™s nice to see him finally get the peace he has earned. Itâ€™s also lovely to see him get to meet his namesake and grandson. That was a beautiful moment in an otherwise tumultuous episode.

Finding Captain Hook will clearly be a much harder task than anticipated. Rumple gets some Ale of SinÃ©ad from his dear ole dad Peter Pan, who is now running the pawn shop. Oh, and who by the way would love to go back up to the real world if only beloved darling dearest Rumple will help him hitch a ride in one of those companions of his. (Look out Henry, he had you once before!) Thank goodness Rumple doesnâ€™t have any shreds of respect left for his dad, so he walks away from that little drama… or so weâ€™re lead to believe.

The Ale of SinÃ©ad is meant to let you speak with the dead when itâ€™s poured on a grave. Although it works great for Regina to find her father, Hook is a tougher nut to crack. He is clearly being tortured and abused wherever he is being held. We havenâ€™t been told who is to blame, but chances are high that itâ€™s the new Big Bad, Hades himself. I have high hopes for Hades being a very fun character to hate this season. Played by Greg Germann, he brings that playful, sheer joy of villainy that every good devil should have.

To make it that much better, unlike a villain visiting Storybrooke, this version of the town is his domain, and completely under his control. Our heroes are the interlopers coming in to upset the balance, and it is Hades who has to defend his territory. Itâ€™s a complete reversal of the normal theme of the show, and it promises to be very fun to watch.

This looks to be the start of something wonderful, and I trust the rest of the season will be equally enjoyable. This has so much potential, and there are so many past characters that would be fun to see again, that next weekâ€™s episode canâ€™t come soon enough.

There are so many moments, both small and large, itâ€™s hard to pick just one. James stealing that kiss? Henry meeting his grandpa for the first time? Emma seeing Neal again? Grandpa Henryâ€™s release?

The moment that really strikes a chord is when Regina sees her father face to face, and breaks down into tears with a heartfelt apology. It is more poignant than all the other MANY great moments in this episode because it clearly demonstrates just how far she has come in her journey. Her remorse and regret are truly genuine, and itâ€™s a beautiful moment of reconciliation.

Once Upon a Time airs Sunday nights at 8/7c on ABC.

The Walking Dead "Not Tomorrow Yet"

Brunoâ€™s TV Journal: The How I Met Your Mother Finale “Last Forever”