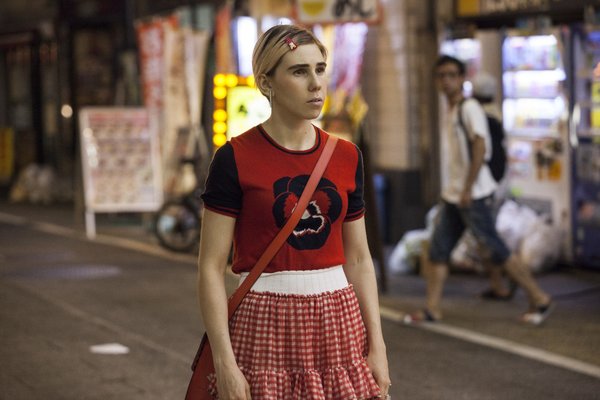 Shoshanna is The Girl on tonight’s all new episode of HBO’s Girls. But before I tell you what you need to know about “Japan,” can we talk about what went down last week?

Fran’s crazy ass roommate drives him out of his apartment. So he moves in with Hannah where he immediately has to deal with a whole new universe. The one Hannah and Elijah live on. In “Good Man,” this includes learning a shirtless Elijah’s house rules:

Elijah: Keep it sweet. Keep it sexy. Keep the fridge stocked with K-Mart brand seltzer. It can be found in Valley Stream, Long Island.

Fran also witnesses Elijah and Hannah’s morning ritualÂ or is it something they do whenever one of them leaves the apartment? It involves a lot of kissing. Elijah’s equal opportunity, though. To no one’s surprise. He makes Fran an offer to join.

Do you get the sense that this cohabitation thing isn’t going to go well for Frannah? Because after these first scenes, I’m already thinking this. I love Hannah but she’s a lot. Like A LOT. And Fran seems like he’s a normal guy. Living together’s going to take this relationship into some dangerous territory. (You’ll see in episode three)

Meanwhile, Ray’s across-the-street coffee house competition doesn’t use lids so customers only go to his place to steal them. Ray makes a very un-PC comment that does not go over well. Seriously. How does Ray get himself into these situations? I’m going on the record. I’m Team Ray on the whole “no lids” argument. I know it’s probably an environmentally sound thing to do. Just no. Give me the lid.

That awkward scene aside, here I am still trying to figure things out. Just like Jessa. She’s trying to not break the girl code. But she’s weakening. You can see it. I’m still feeling that theÂ two are made for each other. But they’re also too much alike. Jessa may be right. Bad things will happen if they get together. And even though they share a great connection, I can’t sign off on these two yet because of Hannah. I just can’t.

Let’s get back to Hannah. While teaching her 8th-grade classÂ about things they should not be taught yet she finds out her dad (Tad) is in trouble. He’s in this really weird vulnerable place. He skipped out on his wife in favor of a jaunt to the city where he hooks up with Keith (Ethan Phillips of Star Trek: Voyager). For some reason, he leaves his wallet at Keith’s place and doesn’t have his s–t together enough to go get it himself, so he begs his daughter to do it. Poor Hannah. She has to deal with her dad’s new life and she has her mom calling her telling her that’s she’s done and she wants a divorce. The positive side of this whole thing is that this messed up scenario leads to my Moment of Goodness for “Good Man.”

The addition of Corey Stoll to Girls is a brilliant move. I never knew I needed him on this show but I’m so happy he’s here. He plays Dill Harcourt, New York’s Number One News Source. The anchor hits on Elijah after he avoids helping the dysfunctional daddy-daughter duo of Hannah and Tad. It’s the best decision of his life considering Dill buys him a drink. The sparks are immediate. TheyÂ seem as different as night and day, however. One’s uptown. The other’s downtown. But,Â hopefully, they’ll meet somewhere in the middle because I’m already intrigued by them. We didn’t get much but it was enough to be my standout moment in the episode.

I also really enjoyed the dialogue in this episode. Just a few choice lines:

Adam: “You’re hiding behind your accent.”
Jessa: “I’m done being shitty. Shitty is old news.”
Hannah’s mom: “I’m surprised he’s not on Christopher Street drowning in a pool of semen.”
Hannah: “I’m starting to feel like I can’t trust any of you people. And by you people I don’t mean homosexuals I mean white men over 50.”
Hannah:”I’m gonna use the restroom. Why don’t you try and stay alive?”
Elijah: “Oh, no way Cosette.”
Elijah: “So I’m gonna go downtown.” Dill: “I’m going uptown.”

Okay, so Shoshanna was nowhere to be found in “Good Man.” The show makes up for this in tonight’s “Japan.” We finally get a glimpse of her fab life in Tokyo.

Thriving at her new job in Japan, Shoshanna (Zosia Mamet) flirts with the boss, but reminds her work friends that she has a â€œkind ofâ€ boyfriend back in America. Hannah (Lena Dunham) makes a shocking discovery on Franâ€™s (Jake Lacy) phone and struggles with how to react. After viewing Adamâ€™s (Adam Driver) performance on a TV police procedural, Jessa (Jemima Kirke) shares her insights into his character.