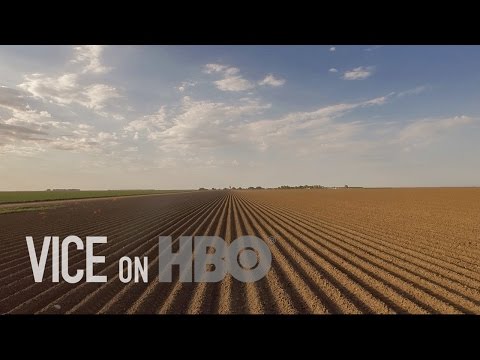 We are in crisis. It takes over 1800 gallons of water to produce 1 pound of meat and the global demand for meat is exploding. On top of that, water is becoming a scare commodity everywhere throughout the world. As the demand for cheap meat increases, the demand for water rises as well. As this crisis goes global, the question isn’t whether or not the amount of water we use is sustainable, it becomes about whether or not it’s recoverable.

The world is addicted to meat. In developing countries around the world, diets are starting to look more like Americaâ€™s, incorporating more and more beef and pork. Massive factory farms are springing up to supply that demand, but industrial meat operations produce more than just cheap T-bones â€“ they also dish out enormous environmental harm. Isobel Yeung travels to the feedlots, farms and slaughterhouses where meat is made, to see the true costs of our burger habit.

The World Health Organization has classified meat as a class 1 carcinogen. So meat is now viewed — at least by this organization and some scientists — to be as harmful as tobacco, diesel exhaust and asbestos. What about synthetic meat? Did you even know that was a thing? It’s fast, but expensive and it’s hard to imagine people would be willing to eat a burger that was grown in a lab. The bigger question, though, is if this planet can sustain the mass production of meat. Massive amounts of CO2 and methane are released into the atmosphere, 1/3 of all land on the planet is used for this purpose and a massive amount of water is needed as well. This is a global disaster now, but it’s not getting much attention.

“End of Water” description, from HBO:

Water is the single most vital resource we have, but it’s also one of the most threatened. Around the world, from the American West to China, South Asia, and the Middle East, water is simply disappearing. Vikram Gandhi reports from Californiaâ€™s once-abundant farmland and the heart of Sao Paulo’s reservoir system to assess the depths of the crisis, and what can be done to reverse it.

Half the fruits and vegetables grown in California supply the rest of the United States. But as California continues to be in a drought, farmers are getting desperate about access to water and can’t farm as much of their land. Drip irrigation is the most efficient way to grow their crops, but as they have to dig wells deeper and deeper into the earth to get to the water they wonder what will happen when all their wells dry out.

What kind of environment will water scarcity create? Sao Paulo is currently going through this crisis. As their access to water has been severely limited, they’ve seen rationing and riots. What can they do to battle this crisis? Halting the destruction of the rain forests will help. The Amazonian Rain Forest irrigates 70% of South America. As it’s destroyed, the continent’s access to water decreases. If all the rain forests across the globe are destroyed — and we’re going in that direction — an apocalypse is a real possibility. Either way, this worldwide water crisis will probably never disappear.

Bates Motel Preview: "A Danger to Himself and Others"